Kovalchuk and Rotenberg in the battle for Russian Railways money

Vladimir Vasiliev and R-industry: from building a bath to billions 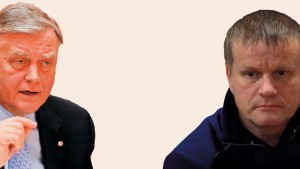 Sources of Rucriminal.info talked about the conflict between two influential clans - the Rotenbergs and Kovalchuk - over the contract billions of Russian Railways. Igor Rotenberg received a proposal to transfer all railway construction projects to structures controlled by Kovalchuk, the main one of which is Vladimir Vasiliev's R-industry. This is due to the fact that structures controlled by the Rotenbergs disrupt the terms of work. Plus, Igor Rotenberg could not discreetly take control of the GK 1520.

About how the R-industry and Vladimir Vasilyev entered into business on contracts with Russian Railways, and then became close to the Kovalchuk family, sources told Rucriminal.info. According to them, Vladimir Vasiliev met with the then head of Russian Railways, Vladimir Yakunin, when his building plant "Rus" built a wooden house for Yakunin. In 2011, when Vasiliev and his company came to Russian Railways, there were two tables and a pen in the R-industry. By that time, there were almost no empty seats in the system of cutting railway money. In St. Petersburg, the vice president of Russian Railways Oleg Toni and the head of Russian Railways, Gennady Talashkin, were sitting tightly on the threads. In Moscow, all railway money went through GK1520, and the companies close to the leadership of Russian Railways businessman Sergei Storozhenko - Monlit and others. As a result, Vasiliev was offered construction on the Tobolsk-Surgut section. “Since the desire to earn was enormous, he bent contractors brutally. Reached up to 40%, ”the source believes Rucriminal.info. According to him, all this affected the quality of work - instead of sand, contractors carried loams to fit into the budget. The sand was not taken at a quarry, but a quarry was developed in a nearby forest. Also, the project laid the laying of an unprofitable upper track structure - on reinforced concrete sleepers.

Vasilyev, by personal agreement with Yakunin, replaced the design decision. The path began to be laid on wooden sleepers. And a year later, the forces of the Russian Railways already redirected the path to reinforced concrete. As a result, money was mastered twice.

Another interesting object of Russian Railways is the station in Tver. The cost of work after the P-industry began to work there, increased from 300 million to 1 billion. But in the State Expertise appetites were slightly reduced. As a result, the cost of estimates was 800 million. But still, the cost was increased 2.5 times.

After leaving Yakunin from Russian Railways, Vasilyev began to have problems.

As it turned out, he was invested 1.5 billion more than was actually done. Such a hidden advance. Anatoly Chabunin, Deputy Head of the Russian Railways Oleg Belozerov for internal control and audit, personally traveled to Tyumen and Surgut twice to assess the situation.

The only thing that stopped him at that time was that the documents for not completed work on the fact of 1.5 billion were signed. Vasiliev was not going to give them back. But I didn’t want to go to law enforcement agencies with a statement that 1.5 billion was stolen. Belozerov and his new deputy for security, Fedoseyev, did not want to scandal.

Vasiliev began to seek protection after the departure of Yakunin.

Vasiliev rally driver, participated in the rally since his youth and is well acquainted with Vitaly Petrov (Formula 1 racer) and his father Alexander Petrov, the owner of large enterprises in the city of Vyborg. Senior Petrov is acquainted with many friends of Vladimir Putin. As a result, through Petrov, Vasiliev met with Kovalchuk, who took Vasiliev under his control.