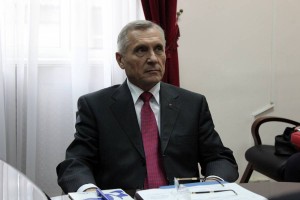 Rucriminal.info continues to talk about the hero of previous publications - the head of the Krasnodar branch of United Russia, Nikolai Gritsenko. Saved from dismissal by the leadership of the CEC ER, Gritsenko decided to prove his influence by falsifying the results of the primaries. Literally the entire social block of the Krasnodar Territory, under the threat of dismissal, was forced to change the address of registration at public services in order to be registered in the Tikhoretsky district and vote for Gritsenko. Gritsenko showed the bar of 31,000 votes to his patrons in order to maintain power. None of the candidates could achieve such values, despite the recognition and financial capabilities.

Gritsenko's gambit with an attempt to influence the appointment to key positions in the region looks much more interesting.

After a series of compromising publications, Gritsenko actually declared war on the department of domestic policy of the region, writing Vice-Governor Chagaev as a personal enemy. Chagaev was supposed to take the position of a federal inspector in the Krasnodar Territory in late May, early June, but the process slowed down. Gritsenko himself says that thanks to personal connections with one of the deputy presidential envoys in the Southern Federal District, he was able to influence the slowdown in the process of approving Chagaev for a vacant position, with a subsequent possible complete refusal.

Gritsenko, despite the revealed connections with criminals, and the criminal past of his family, still expects to get the seat of a senator, or at least retain the position of deputy chairman of the regional Legislative Assembly, for which he needs to have at least 5 deputies in the regional parliament.

As revenge for the reputational costs, Gritsenko decided to aggravate the situation around the primaries, instructing unapproved candidates to take part in the United Russia preliminary vote. Gritsenko’s candidates did not pass the primaries, but he claims that at the upcoming regional conference on July 5, he is ready to “pig” the governor’s team and, with the support of the CEC and the embassy, ​​nominate financially secure candidates who lost the primaries.

According to a Rucriminal.info source, Gritsenko, who believes that he is playing a successful gambit, has actually driven himself into a corner, exacerbating intra-elite conflicts in the region, which are especially wary in the VPB AP, understanding who provokes them.

Sources say that in the districts where Gritsenko and "his" candidates are nominated, total control by the federal center should be expected to ensure the legitimacy of the election process and demonstrate real (low) support for Gritsenko and his team. Attempts of stuffing and the usual set of administrative practices will be severely suppressed, and the perpetrators will be held accountable.

Earlier, the VChK-OGPU telegrams told that the head of the Krasnodar regional branch of United Russia, deputy chairman of the ZSK, Nikolai Gritsenko, began to knock on the thresholds of Moscow living rooms to obtain approval for the position of senator from the region. Gritsenko, under the pretext of having serious compromising evidence, is trying to convince decision-makers about the need to replace the current 72-year-old senator Vladimir Beketov.

Federal curators, as well as regional authorities, were not enthusiastic about the idea of ​​Gritsenko's senatorship, not only because of its toxicity, but also in connection with a dark spot in his biography. Gritsenko has been carefully hiding the criminal past and present of his family for several years.

It is possible that Gritsenko, who was aiming for the seat of senator in the late 90s, was associated with criminal authorities and groups that accounted for racketeering, robberies and murders, but he managed to erase unpleasant circumstances from his biography.

Another reason for Gritsenko's refusal to agree to the position of senator is his close and business relationship with his colleague in the ZSK Alexei Rudnev, suspected of commercial bribery and other fraudulent transactions using Gazprom structures. At present, more serious circumstances may emerge in the Rudnev case, pulling on a life sentence, which Nikolai Gritsenko knew and kept silent about.