Ernst swears at a concert of the president

The head of the "First" sends to .. and agrees to the state transfer 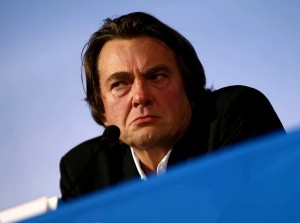 Rucriminal.info continues to publish confidential conversations between officials and oligarchs, which Boris Berezovsky has fixed debts for years. From these conversations, readers can learn many secrets of representatives of the Russian authorities and business elites, journalism, what they really talk about and think about, rather than “humming” into the ears from the TV screens. In a new portion of “wiretaps”, we present the conversations of the then-ORT (Channel One) manager on behalf of Berezovsky Badri Patarkatsishvili and the channel’s top manager Konstantin Ernst. Boris Yeltsin conducted an election campaign, concerts were to take place in Moscow with his participation. Sergey Lisovsky was engaged in their organization, and Igor Malashenko supervised the entire work of the president with TV. This was clearly very annoying Ernst. On the first record, the outraged Ernst swears that Malashenko "hangs" on him a TV show with the participation of Yeltsin, stylized as "Old Songs about the Main."

“Lisovsky told me, ORT, you’ll shoot all this. Lisovsky has no money. What money is not clear. It will be shit, we are substituted. Malashenko substitutes us. He went to x ... I do not obey him. I don’t do concerts. There will be no real “Old Songs”. Artists do not want to go to Lisovsky. Malashenko says you have to show it. He went to x ... ", - Ernst swears.

Patarkatsishvili asks to briefly explain the reason for the outrage.

“I am indignant, since Malashenko’s ..”, Ernst continues to swear. Badri offers to send Malashenko and finish this.

However, it later turns out that it will not work to send Malashenko, since he is authorized to do the job by the president.

In the next entry, published by Rucriminal.info, Patarkatsishvili tries to delicately convey this to Ernst. And in return, it offers incentives from superiors in the form of free accommodation at the state dacha. You will not believe it, but under Yeltsin, television managers did not have palaces on Rublevka for hundreds of millions of dollars. And the opportunity to live on a state dacha was a significant bonus for them. Now everything has changed ...

“I need arguments against Malashenko, the ones I brought in they fended off,” Badri said.

Dissatisfied Ernst continues to bend his line: “I, as the author of“ Songs about the Essentials, ”gave permission for such a concert, but there will be half of the artists ... There will be no original scenery. We turned to Mosfilm, they turned out to be taken apart, ”Ernst is trying to find at least some arguments.

“The fox (Lisovsky - Ed.) Said that the scenery would cost a hundred thousand,” says Badri.

“How much ?,” Ernst becomes indignant. “Do you know how much they cost to all the Songs of the Main?” 120 thousand. And then ... Let Igor (Malashenko-Ed.) Engage in this concert. ”

Patarkatsishvili is clearly tired of Ernst's whims and he suggests that he call Malashenko himself and give some convincing arguments. The voice shows that the discontented Ernst surrenders. Badri explains that Lisovsky and Shabdurasulov “attacked” him and offers Ernst an “incentive prize”. “If there is an opportunity for you to live on state housing, will you go?”