Banker kidnapped during a search 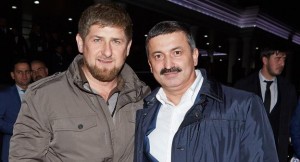 On Monday, the Nikulinsky Court of Moscow is to host a hearing on the case against the ex-plenipotentiary of the head of Chechnya in Ukraine, Ramzan Tsitsulaev. On the past, November 12, he did not appear. If Tsitsulaev does not come to court again and reliable explanations are not presented, then the ex-plenipotentiary may be declared on the federal wanted list. Prominent representatives of Chechnya are usually not put on the international wanted list, just as they do not choose a measure of restraint. Therefore, they calmly get out to Turkey, the UAE, etc.

Rucriminal.info continues to acquaint readers with the "Tsitsulaev case". Today we will cite a fragment on the main charge - the kidnapping of a shadow banker, also a native of Chechnya, Ali Zakriev. The meaning of the story is simple. The owner of the Delta Key payment system, Andrei Novikov, shadow bankers Romanov and Zakriev, together were involved in illegal cash withdrawal and transit operations. Somehow, after another transaction, the client did not receive more than 100 million rubles. Novikov found out that the money was appropriated by Zakriev and Romanov, but he could not influence them, due to the fact that Zakriev had a “high position in the Chechen ethnic diaspora”. Then Novikov, through a friend, turned to the fixer Ruslan Barkovsky, who had "extensive connections with people from among the law enforcement officers." He, in turn, decided to bring to the situation Tsitsulaev, who has "stable extensive connections and significant authority among persons belonging to the Chechen ethnic group." Also, Barkovsky decided to involve familiar employees of the Criminal Investigation Department of the Main Directorate of the Ministry of Internal Affairs in Moscow. It was decided that Zakriev and Romanov would be kidnapped and forced to pay back a debt of 109 million rubles. In return, Tsitsulaev and Barkovsky were to receive half of this amount. Romanov and Zakriev used security, so the attackers played a whole show. Through his connections, Barkovsky learned that the Main Investigation Directorate of the Main Directorate of the Ministry of Internal Affairs of the Russian Federation in Moscow would conduct a search at Romanov's. (Or maybe he organized this search, the investigation did not begin to study this particular moment). According to the attackers' plan, Romanov Zakriev's "roof" had to come to the search. And after the search, an officer of the Criminal Investigation Department could “detain” Romanov named after Zakriev (which would not have looked suspicious) and handed over to Tsitsulaev's bodyguards. 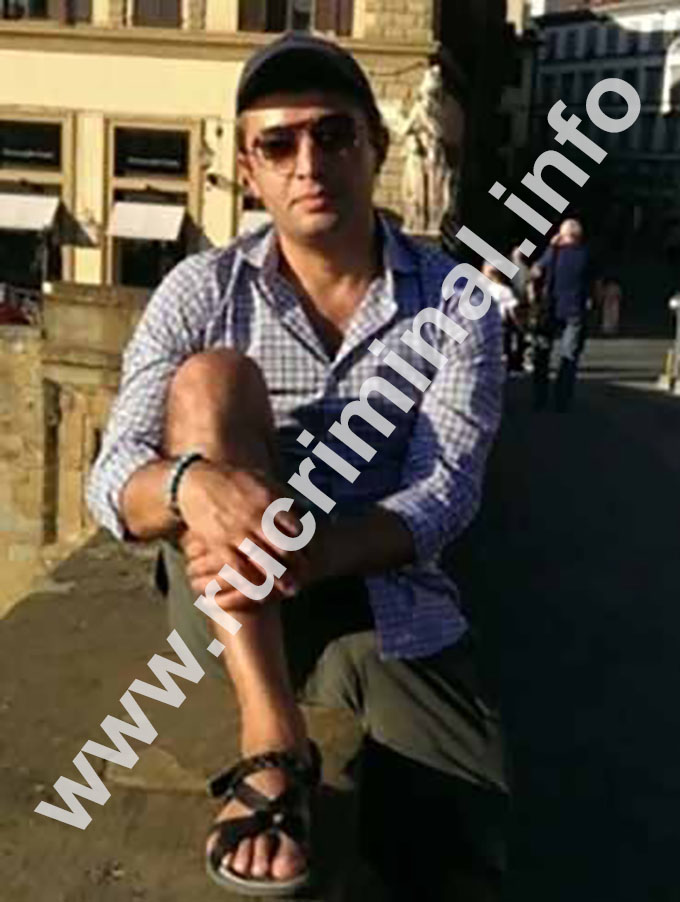 And now Rucriminal.info cites the relevant fragment from the case materials: “Barkovsky R.A. and Tsitsulaev R.L., acting jointly and in concert, in selfish interests, decided to kidnap A.A. Zakriev. and Romanova M.A., after which, having applied to the latter violence dangerous to life and health, with the use of objects used as weapons, to demand the transfer of property and rights to property in the form of money in the amount of at least 109,000,000 rubles, that is, in especially on a large scale, hoping to force M.A. and Zakrieva A.A. close debt obligations to NPO Delta Key represented by AN Novikov, while receiving half of the total amount of debt obligations.

In turn, Tsitsulaev R.L. ... acting in pursuance of a common criminal intent with the accomplices, at precisely the time and place not established by the investigation, under unknown circumstances to participate in the capture of A.A. Zakriev. and Romanova M.A. and their subsequent movement attracted Madaev D.S. and his friends - Madaeva M.M., Madaeva Kh.E., Soltalieva M.A., Tukaeva R.Kh., as well as Taramova Ad.I., Sagaipova A.S., Taramova Al.I., who played the role personal protection Tsitsulaeva R.L. 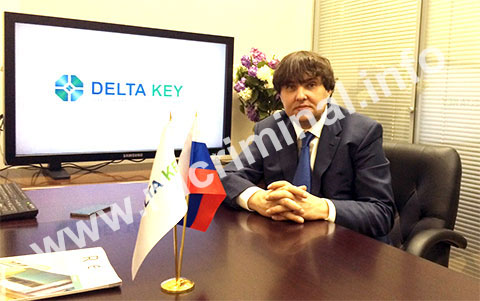 In turn, Novikov A.N. provided the necessary documentation to OOO NPO "Delta Key", indicating the involvement of MA Romanov. and Zakrieva A.A. to the formation of the organization's debt to creditors, having provided at the disposal of R.A. Barkovsky. employees of NPO LLC - Nureeva A.N. and Tolshina E.M., aware of the place of residence of M.A. Romanov, and the vehicles he used.

Acting on the instructions of R.A. Barkovsky, in pursuance of the developed criminal plan, Kononova E.A., 08/19/2014 at an unspecified time, but not later than 00 hours 30 minutes, provided Balaev F.N.o., acting in agreement with accomplices, information about the place of residence of MA Romanov, arriving together with FNo Balaev. on a car "Volvo C60" state registration plate (hereinafter - b.z.) C807UO190 RUS under the control of IS Samarkin, unaware of the criminal intentions of the latter, to the house at the address: Moscow, st. Ramenki, 7, building 2, where FNo Balaev routes of approach and departure to the alleged place of the abduction were determined.

08/19/2014, in the period from 07 hours 00 minutes to 10 hours 00 minutes, Taramov Ad.I., Sagaipov A.S., Taramov Al.I., using a car "Nissan Armada" b.z. K550EN750RUS, Madaev D.S., Madaev M.M., Madaev Kh.E., Soltaliev M.A., Tukaev R.Kh., a car of the brand "Cadillac Escalade", b. С450ON77RUS, arrived at the direction of Tsitsulaev R.L. to the hotel "Swissotel (Swissotel) Krasnye Holmy", located at the address: Moscow, Kosmodamianskaya embankment, 52, building 6, where they were expected by R.A. Barkovsky, F.N. Balaev, T. Balaev A.O., and Andreev A.Yu. In the same place, on a Ford Mondeo car, b.z. M936RO777RUS were Tolshin E.M. and Nureyev A.N., who had information about the commercial activities of M.A. Romanov. and A.A. Zakrieva, substantiating the so-called debt obligations of the latter to LLC NPO Delta Key represented by A.N. Novikov, who acted at the direction of the latter, but were ignorant of his criminal intentions.

Barkovsky R.A., being on the territory of the hotel "Swissotel (Swissotel) Krasnye Holmy" at the address: Moscow, Kosmodamianskaya embankment, 52, bldg. 6, 19.08.2014, no later than 10 hours 00 minutes, having received information about a favorable opportunity for the unimpeded implementation of a planned crime, acting in accordance with a previously developed scheme for committing a crime, he brought to each of the above accomplices a general plan of action, distributing criminal roles between them.

Direct participation in the abduction of A.A. Zakriev and Romanova M.A. at the place of its commission, with the use of objects used as weapons, according to the plan developed by R.A. Barkovsky. and Tsitsulaev R.L., were supposed to accept Balaev T.A.o., Madaev D.S., Madaev M.M., Madaev Kh.E., Soltaliev M.A., Tukaev R.Kh., Taramov Ad .I., Sagaipov A.S., Taramov Al.I., as well as those providing detention under the guise of law enforcement officers, acting police officers Andreev A.Yu., Olshansky V.S. and other unidentified persons, while Balaev F.N.about. and Barkovskiy R.A., being in cars, at the scene of the crime, had to observe the environment, coordinating the actions of the accomplices, ensuring the smooth commission of the crime. After the capture of Romanov M.A. and Zakrieva A.A., not excluding the persons guarding the latter, it was planned to move them to the previously prepared and controlled by R.A. Barkovsky. the premises of a car wash at the address: Moscow, Kostomarovskaya embankment, 29, building 2, after which to present to the abducted the demand for the transfer of property in the form of money, using violence dangerous to life and health, breaking their will to resist, to obtain the required property. In case of refusal to transfer the required property, Madaev D.S., Madaev M.M., Madaev Kh.E., Tukaev R.Kh., Soltaliev M.A. and Taramov Ad.I., were to move A.A. Zakriev. and Romanova M.A. in advance prepared by R.A. Barkovsky basement of a residential building at the address: Moscow region, Istra district, village Manikhino, st. Zelenaya, 11, where, using violence against them, dangerous to life and health, to keep the victims against their will, up to the transfer of the required property. Control and management of the actions of accomplices directly at the crime scene Tsitsulaev R.L. and Barkovsky R.A., have imposed on themselves. " 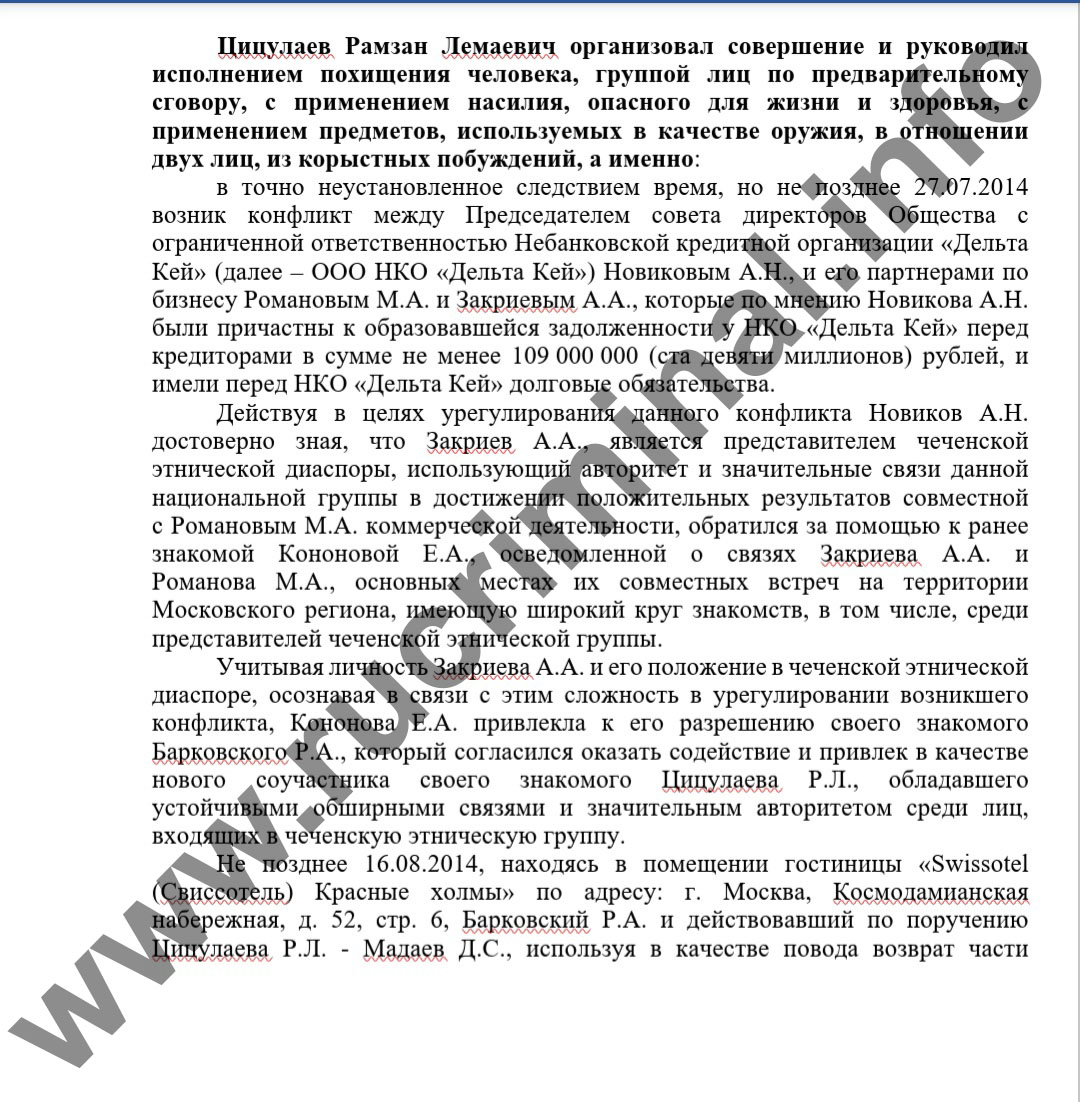 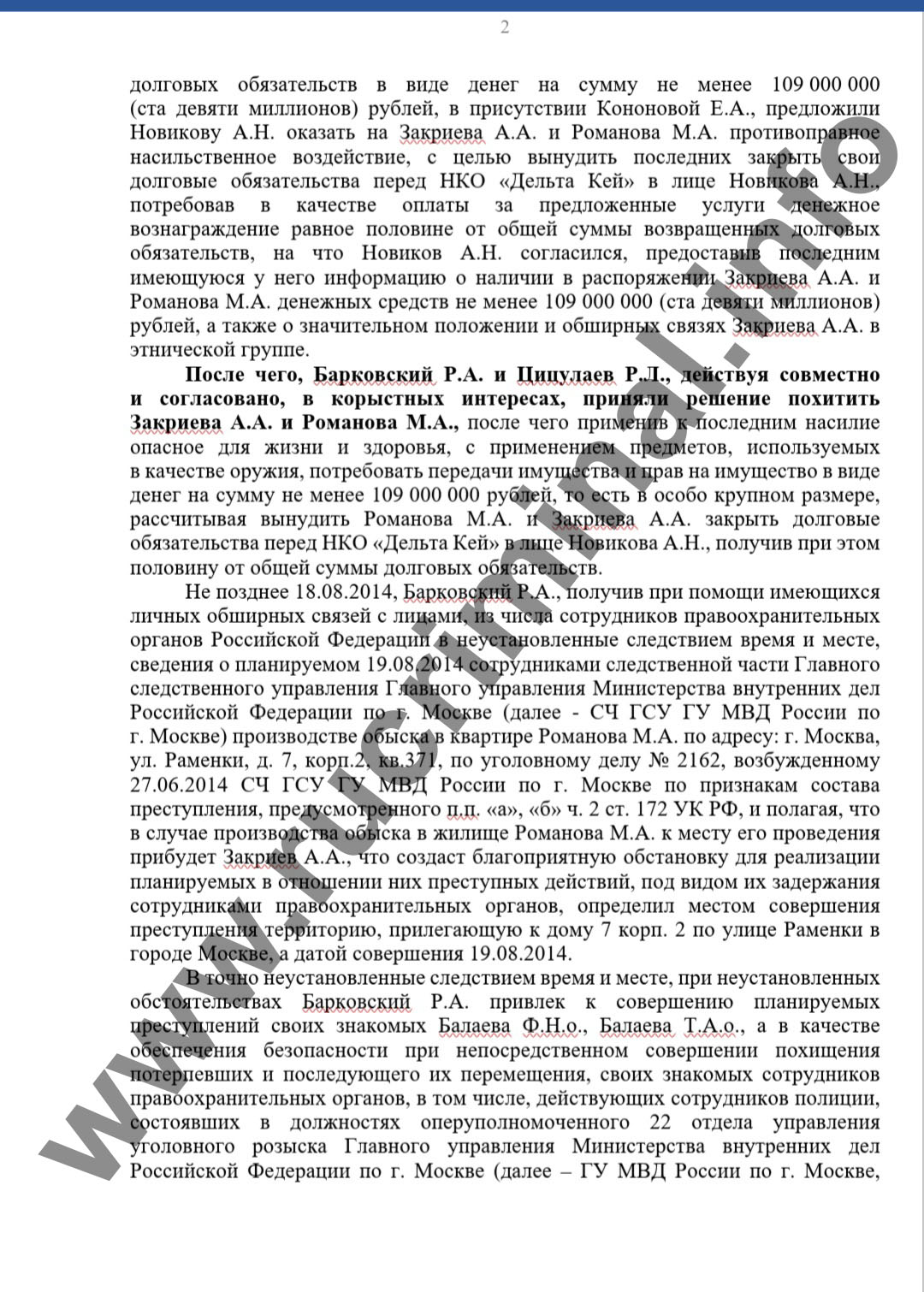