Lawyer Mikhail Efremov is being prepared for "landing"

The prosecutor's office remembered the case of major fraud 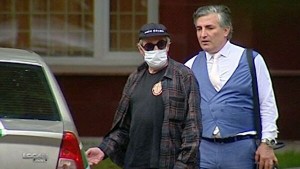 The Moscow Prosecutor's Office requested to check materials No. 11701450012000524, which was initiated on the fact of fraud. The main person involved in this case is Mikhail Efremov's lawyer Elman Pashayev. For two years now, the Department of Internal Affairs of the Central Administrative District and the Main Investigative Directorate of the Investigative Committee of the Russian Federation in Moscow have been playing this case for two years, since it is not determined whether Pashayev is a special subject and, accordingly, which department should conduct the investigation. The case was initiated at the request of Pashayev's former clients, including Aleksey Arsenovich, the former head of the FMS department for the Yuzhnoye Butovo district. Pashayev guaranteed all of them sentences in the form of suspended sentences and fines, for which he demanded to give himself and his firms large sums. And clients always received large real terms. The Moscow prosecutor's office does not exclude that after the verdict, Efremov himself may face such a situation, so they decided to deal with the old case in advance. If everything is fine with him, the investigation will be activated in the very near future. At the disposal of Rucriminal.info is the statement of the victim Arsenovich, with which we acquaint readers. 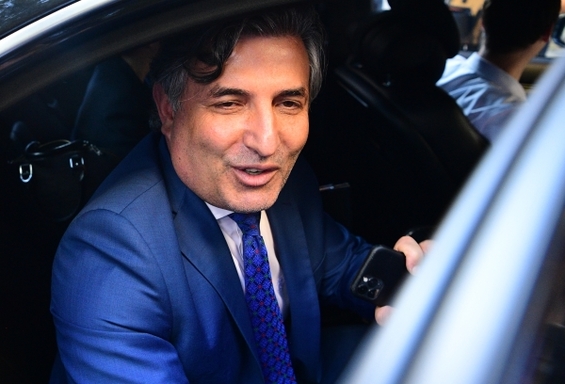 04.12.2009 Pashaev E.M.o. and his wife Pashaeva E.V. established LLC "Legal Center" MINARA "(an extract from the Unified State Register of Legal Entities in the form of a printout from the website of the Federal Tax Service of Russia is attached), which is not a lawyer's education (clause 1 of article 20 of the Federal Law of May 31, 2002, No. 63-FZ" On advocacy and Advocacy in the Russian Federation ”(hereinafter referred to as the Law) provides an exhaustive list of lawyer formations).

* At the end of 2016, the name of LLC Legal Center MINARA was changed to LLC International Law Company Elman Group.

At the end of January-beginning of February 2014 lawyer Pashaev E.M.o. agreed to defend me in criminal case No. 802176 (1-116 / 2014) pending proceedings at the Zyuzinsky District Court of Moscow and said that I needed to conclude an agreement on the provision of legal assistance. At the same time, E.M. Pashaev convinced me to pay 5,000,000 rubles under this agreement, promising that for this amount he would provide me with a maximum suspended sentence and a fine within the law. I agreed.

Having fully trusted the lawyer Pashaev E.M.o., I, following his instructions, 02/03/2014, arrived at the office of LLC "Legal Center" MINARA "(hereinafter - the Company) at the actual address: Moscow, Bolnichny per., 1, apt. 3, where he concluded an agreement No. 045/14 (hereinafter referred to as the Agreement), which, as I later found out, is not an Agreement concluded between the principal and a lawyer, as required by Article 22, cl. 1 and 2 of Article 25 of the Law, since the counterparty under this agreement was LLC "Legal Center" MINARA ", represented by a representative by proxy VA Khorokhorina, and lawyer Pashaev E.M. was listed only as the executor for it.

It is noteworthy that other persons do not have the right to enter into relations between a lawyer and his client. Moreover, by virtue of Article 49 of the Criminal Procedure Code of the Russian Federation, the MINARA Legal Center was not able to defend me in a criminal case, and, therefore, was not entitled to conclude such an agreement. However Pashaev E.M.about. convinced me to conclude just such an illegal Treaty.

02/12/2014, delusional about the legal nature of the said Agreement, its legitimacy, in LLC "Legal Center" MINARA "personally handed over to the lawyer E.M. Pashaev. 5,000,000 rubles, which he put in a drawer of his desk.

However, in receipt of this money, directly on my copy of the Agreement, I signed on the instructions of E.M. Pashaeva. General Director of this LLC Panchenko I.N.

At the same time, as follows from the indicated orders, the basis for their issuance was a certain Agreement, which, in reality, I and Pashaev E.M.o. did not conclude.

Under such circumstances, it is obvious that Pashaev E.M.about. used fake orders to protect my interests, because in the absence of a corresponding Agreement, he had no grounds for their execution with reference to him in the orders.

This fact is confirmed by the answer from the Bar Association of Krasnodar Territory (attached) that the order book, including orders No. 871060 dated 12.02.2014 and 871066 dated 15.07.2014 were issued to lawyer E.M. Pashaev. branch number 19 of the Krasnodar regional collegium of advocates, but he did not report on the fact of their use. There is no data on the Agreements behind which these orders are registered in the indicated branch.

There could not be such an Agreement, since, apart from the specified Agreement with LLC Legal Center MINARA, I did not conclude with Pashayev E.M.o. as a lawyer.

E.M. Pashaev convinced me that the court will give me a maximum suspended sentence and a fine within the law. These obligations are specified in clause 3.3 of the Agreement (Result in the case).

However, according to the verdict of the Zyuzinsky District Court of Moscow on July 24, 2014 in case No. 1-116 / 2014, I was found guilty of 7 crimes under Part 3 of Article 290 of the Criminal Code of the Russian Federation, and he was sentenced to the form of imprisonment for a period of 4 years 6 months with serving a sentence in a penal colony with a general regime, with a fine of 2,500,000 rubles, with the deprivation of the right to hold positions related to the performance of the functions of a representative of government, organizational, administrative and administrative functions in the bodies state power for a period of three years.

The measure of restraint chosen against me from not to leave the place and proper behavior was changed to detention.

Further, the Appellate ruling of the Moscow City Court from 27.10.2014 g. Actions Arsenovich A.The. qualified for 7 crimes under Part 1 of Article 285 of the Criminal Code of the Russian Federation and a final sentence of imprisonment for a period of 3 years 6 months was imposed, with serving the sentence in a penal colony of general regime, with the deprivation of the right to hold positions related to performing the functions of a representative of government, organizational and administrative and administrative functions in government bodies for a period of 2 years.

Thus, LLC "Legal Center" MINARA "and Pashaev E.M.o., did not fulfill their obligations to me under the Agreement. The Company itself, as a party to the Agreement, did not perform any actions in accordance with the terms of the Agreement.

In accordance with clause 3.3 of the Agreement, the performer, in case of failure to fulfill his obligations, was obliged to return (reimburse) me the entire amount paid under it - 5,000,000 rubles.

Since I was in prison and could not independently receive (return) the 5,000,000 rubles paid by me under the Agreement, on December 4, 2014, during the period of serving the sentence imposed on me by the court in PKU IK-25 of the Federal Penitentiary Service of Russia in the Kirov region, I issued my friend Stepanov Sergei Viktorovich Power of attorney (a copy is attached), authorizing him to receive in the Company with the subsequent return to me of 5,000,000 rubles under the specified Agreement. " 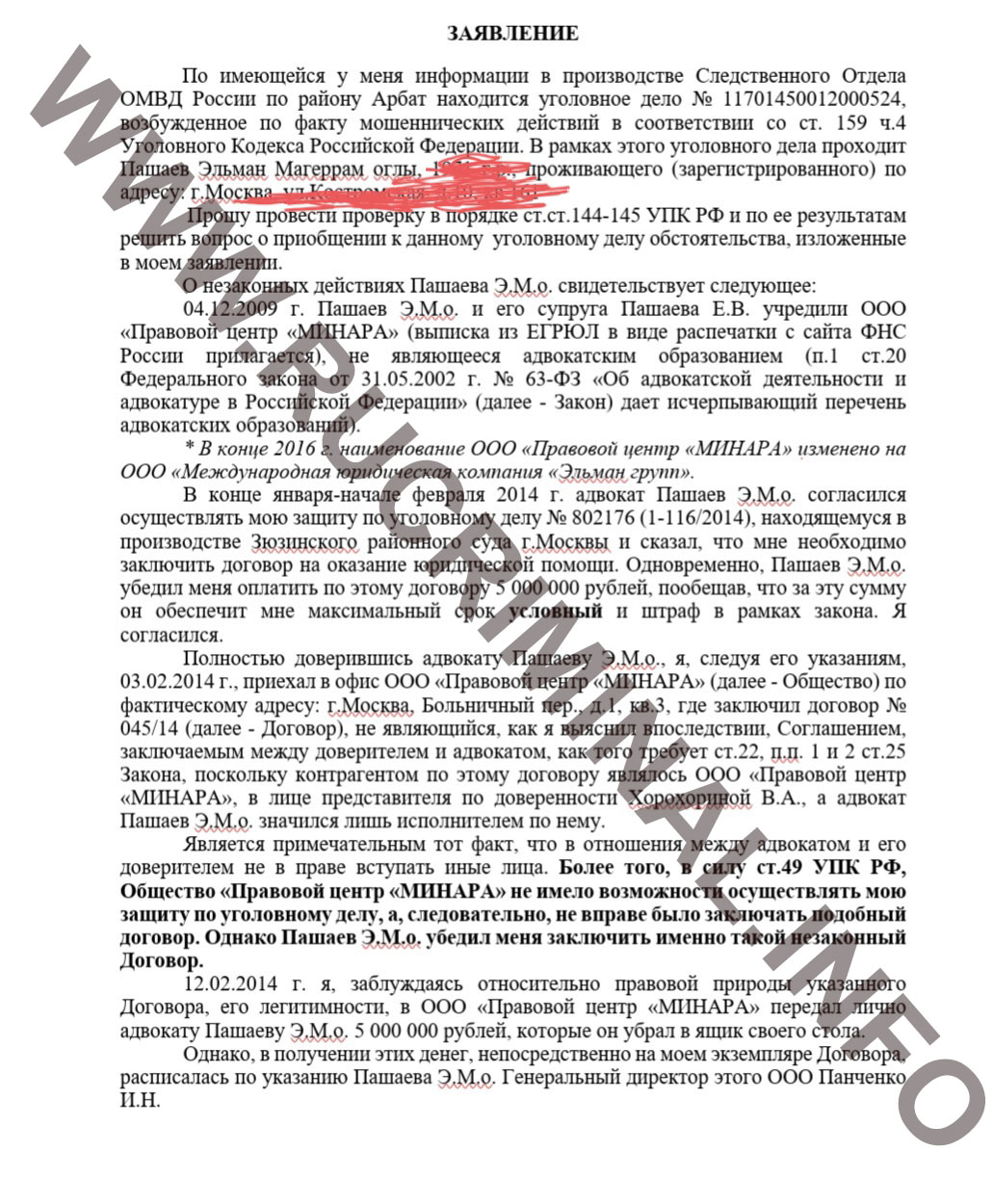