Leonid Simanovskiy Deputy of the State Duma of the Russian Federation 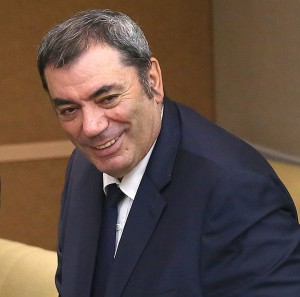 In 1979 he graduated from the Kuibyshev Planning Institute, in 1995 - the Moscow International Finance and Banking School. Candidate of Economic Sciences.

In 1995 he was elected president of the Commercial Bank "Solidarity".

In 2001 - Chairman of the Board of Directors of OJSC "SNP NOVA". Also he was one of the founders of JSC "Khimpromindustria Group".

In 2003-2007. - Deputy of the State Duma of the Federal Assembly of the fourth convocation.

December 2, 2007 elected to the State Duma of the fifth convocation. A member of the faction "United Russia".

December 4, 2011 was elected to the State Duma of the sixth convocation. Deputy Chairman of the State Duma Committee on Budget and Taxes
In February 2006, "Finance" magazine estimated Simanovskiy at 425 million dollars (92 th place in Russia). According to data released in May 2010 on the website of the State Duma, Simanovskiy officially proved the richest deputy: In 2009, he earned 1 billion 184 million rubles.His property was a large plot of land, a house, an apartment and a car "Mercedes S500».

He is married and has a daughter (Sofia and Svetlana)
vedomosti.ru

Career From 1979 he worked as deputy manager of the trust Kuybyshevtruboprovodstroy, who led his father Leonid Michelson (№1), and since 1987 he and Michelson. In 1991, the Trust was reincorporated and changed its name to the SNP "Nova".

The event in April 2015 refused to participate in the board of directors of "Novatek" because of the demand in the State Duma.

Policy Going to run for parliamentary elections as part of the party list of "United Russia" on the Khanty-Mansiysk District, but in the beginning of 2016 chose a new electoral platform - the Samara region, where he was born.
Forbes.ru

Simanovskiy Married to Svetlana Simanovskaja, for in 2011, according to the media, she held the position of Deputy Chairman of the Board of JSC "Bank" New Symbol '. " Colleagues Simanovskiy told "Vedomosti" that he tries to spend more time with his wife and children - they had four.

In 1975 he graduated from the Faculty of Foreign Languages of the Kuibyshev State Pedagogical Institute.

Sophia Simanovskiy positions itself as "held business woman." So, it is actively involved in the operational management of the Samara "First United Bank", planning to bring this bank to the regional to the national level. The entire key bank staff personally selected Simanovskaja and completely loyal to her.

In 1996 he graduated from the philological faculty of the Samara State University.
After graduating from high school, Svetlana Simanovskiy worked as an employee in the personnel department of the oil company "Yukos", as well as in various Moscow bank structures. Currently, she is the deputy chief of department on work with the personnel of CJSC "ING Bank".

In May 1996, Simanovskiy, as President of the Samara Bank "Solidarity", joined the Board of Directors of JSC "Samaraneftegaz" together with the other six members of Yukos. This organizational change consolidated the dominance of Yukos' Samaraneftegaz. " In addition, the powers of the new Board of Directors expanded: increased power to appoint the general director.

After the company "Samaraneftegaz" came under the control of Yukos, "Solidarity" has become a pocket bank Khodorkovsky empire. During this Simanovskiy he was promoted to vice president of Yukos and held senior positions in the affiliated structures.

After Yukos had control of "Yuganskneftegaz", the city budget of Nefteyugansk almost vanished taxes, instead of money the company offered Menatep illiquid promissory notes or a different property. Residents who do not receive a salary, spontaneously began to hold meetings, to block the road, trying to storm the office of the company. After this came to Nefteyugansk Simanovskiy and Mikhail Khodorkovsky and distributed to budget 30 million rubles, which, however, did not affect the debt repayment schedule. Only after Simanovskiy resigned from Yukos, the city began to recover. Tatyana Shevtsova, who led at the time of the financial management of the City Hall of Nefteyugansk, in the trial of the former head of the economic security department of YUKOS Aleksey Pichugin, who was accused of the murder of the Nefteyugansk mayor Vladimir Petukhov, the mayor linked the murder with his confrontation with Yukos.

Petukhov was shot on his way to work in summer 1998. Ten days before he went on hunger strike, demanding to initiate a criminal case on the fact of concealment of taxes by Yukos. At the trial in the Moscow City Court widow Petukhova Farid Ismailov said that in Nefteyugansk Yukos came from its shareholders to decide the issues of interaction with the mayor, including Simanovskiy. Once, she said, the head of Yukos department for cooperation with the regions, Yuri Petukhov Kopanev brought diplomat with dollars from Simanovskiy, but he did not take it.

In December 2000, Simanovskiy with the former chairman of the Samara regional council Viktor Tarkhov made a presentation of the chemical holding "Khimpromindustria", created on the basis of Novocheboksarsk JSC "Khimprom" and Togliatti of "Phosphorus." But things have evolved at the same time the holding is not the best way. Before that, in September Tarhov received in trust 25.5% of shares of JSC "Khimprom", and 24.59% stake in the company has received "Dekort", which was created with the participation of the bank's "Solidarity", one of the founders of which was Simanovskiy. Thereafter Tarhof and Simanovskiy bought "Phosphorus", but failed to bring its stake to a controlling one - the majority of shares bought Tolyatti company "A-tex", which was the CEO Irina Handel. Tarhov tried to hold an extraordinary meeting of shareholders to enter into his men's board of directors, but the meeting was disrupted, but Handel said that the company will not give up, but the idea of a chemical holding based on "Phosphorus" hers. After that Simanovskiy and Tarkhova have difficulties with "Khimprom": the legitimacy of the transfer of its state actions has been questioned. At the same time in Ramenskoye City Court it was sent to claim a minority shareholder Kutin, who demanded to arrest the shares of the company, and it was done.

In addition, it was found that about 15% of "Khimprom" belonged to the Moscow publisher Oleg Mitvol, the board chairman of the newspaper "Novye Izvestia". Redeem them had succeeded, but not immediately, Mitvol agreed to sell them in 2001 alone. Thus, the shareholders of both companies fiercely resisted expansion and Simanovskiy Tarkhova. But by the summer of 2001, they were able to establish control over the "Khimprom" and divide the spheres of influence to "Phosphorus".

In 2001, he decided to retire from Simanovskiy Khodorkovsky. The reasons for his decision, he explained to him the desire to start their own businesses. After that, in 2003, an old friend Simanovskiy Leonid Michelson gave him become chairman of the board of directors and Novatek stake in the business.

For many years, the activities supported Simanovskiy Vice Governor YaNAO Joseph Levinsohn. Thanks to him, Novatek gets the best field and became the leader of independent gas producers.

NOVATEK was established initially with the support of the regional leadership, in particular, the Vice-Governor YaNAO Joseph Levinson. Most likely, the reason for Levinson interest in Novatek prosperity lay in the fact that one of the shareholders of the holding company was "Leviticus", officially owned by multimillionaire Leonid Michelson, but that many stands for "Levinsohn and comrades." Levinsohn Simanovskiy helped privatize the company "Purneftegasgeologia" first promising subsidiary company "Gazprom" "Zapsibgazprom" package of its shares in exchange for investments. The money had been received, but the shares have not given. Then Levinson spent an additional issue of the company, and then sold his controlling stake in Novatek. And that was more difficult to return the assets, NOVATEK reorganized "Purneftegasgeologia", creating from it a few companies, and interest passing offshore. Levinsohn also assured the representatives of "Gazprom", which participate in the development Yurkharovskoye fields unprofitable, then control it established Novatek. Mine turned out to be extremely profitable, and Levinsohn always known about it. "Gazprom" has made repeated attempts to recover assets NOVOTEK state.

In summer 2005, I went on vacation, and actually retire Levinsohn. Some thought that since he is trying to bring Novatek from the blow of law enforcement agencies before the intended deployment of the company's shares on the London Stock Exchange. Thereafter Simanovskiy and other owners of Novatek began to try to sell assets in parts, because without supervision Levinson case, the company could go much worse.

In 2009 it started the confrontation defenders Utrish reserve a place on the Black Sea coast and prospective developers. The construction of the road-Utrish Sukko that threatened thickets of relict trees. Land for construction of the road was allocated certain non-regional fund "Dar" project with an office in Moscow. The founder of "Dara" - OOO "Levit" Michelson and Simanovskiy.

In 2010 Simanovskiy made the list of the Public Chamber, which includes the most hard-core truants in the State Duma. After his name in connection with this list appeared in the media, Simanovskiy reformed and stopped skipping.

According to data released in May 2010 on the website of the State Duma, Simanovskiy officially proved the richest deputy: In 2009, he earned 1 billion 184 million rubles. His property was a large plot of land, a house, an apartment and a car "Mercedes S500».

According to the newspaper "Vedomosti", Simanovskiy owns real estate in Cyprus.

Once Leonid Simanovskiy was vice president of Yukos, and even rumored that the Duma, in 2003, he came to feed it Khodorkovsky. But, unlike many of his former colleagues, ex-oilman now so everything is in order that he not only retains his previous company, but also acquires new. Thus, in recent years there Simanovskiy shares of a company "Levit". - According to the documents it was "Leviticus" is the founder of the Fund "DAR", which a few years ago began construction in the Black Sea reserve "Big Utrish", - explained the "interlocutor" ecologist Maria Ruzina. It is assumed that in the Utrish under the guise of "sports and recreation center" is being built another residence of the President, to whom the deputy status, you see, modestly fading.

Historic farm in the center of Moscow HPP-2, which has bought the structure of Leonid Michelson, stop work in the current year. Further the company plans for the property are still unknown.

... As reported, the customer station was sold to OOO "Leviticus", the main owners are the shareholders of "Novatek" Leonid Michelson (78.29%) and Leonid Simanovskiy (21.71%), it follows from the database "SPARK-Interfax". They paid OAO "Mosenergo" station for 1.7 billion rubles.

Fund "DAR" in his time was called "Medvedev purse", which allegedly received money from businessmen, "Medvedev experiencing a sense of gratitude." The founder of the "gift" is the company "Levit"; She also owned shares in the second after the "Gazprom" gas producer in Russia - JSC "Novatek". The shareholders of "Leviticus" were very influential people - former State Duma deputy Leonid Simanovskiy and businessman Leonid Michelson.

Longtime lobbyist for the interests of the Michelson and "Novatek" in political circles believe Leonid Simanovsky (also a member of Forbes-2016, $ 950 million), the current deputy chairman of the Duma Committee on Budget and Taxes. Now Simanovskiy running from the "United Russia" for a new term. Simanovskiy 1979 was deputy Michelson father, when he headed the Samara trust "Kuybyshevtruboprovodstroy". In 1987 he became manager of the trust Michelson Jr.. "Although April 2015 may Simanovskiy resigned from the board of directors" Novatek "because of the high load in the Duma, its long-standing relationship with the" Novatek "went nowhere", - says political consultant Alexei Bocharov.

Vice-president of YUKOS Leonid Simanovskiy "covered" Michelson in the business environment. Levinson and Simanovskiy services were hardly free. Levinsohn all truly fabulously rich to "Novatek": by some accounts, his condition is greater than that of Michelson - it is close to $ 1.5 billion..