Sea of ​​blood for the deputy 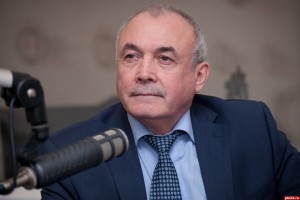 A large sponsor of the political party "Fair Russia" for a long period of time was a businessman from the Pskov region, ex-deputy of the State Duma Mikhail Bryachak. However, he is better known to law enforcement agencies as the "treasurer" of one of the leading organized crime groups in the North-West of Russia. Details are in the Rucriminal.info investigation. Mikhail Bryachak began his political career in the late 90s and the first step was the election of the governor of the Pskov region in 2000. This was one of the first in a series of failures in the political field. The victory was then won by the candidate from the Liberal Democratic Party Mikhailov E.E. Later Bryachak M.The. I never managed to get close to my cherished dream.

Until 1993 Bryachak M.V. was a member of the organized criminal group of AV Ivanov, performed the duties of a "treasurer". For Bryachak M.V. already at that time theft of money from the common fund and deception of their comrades was noticed. The impunity of their actions Bryachak M.The. was obliged to the friendly attitude towards him by the local authority Volkhonov *.

* Volkhonov, nickname "Gapon", the leader of the organized criminal group, the number of members is 50 people. In 1993 he was killed at the entrance of his house.

After the murder of Volkhonov, Bryachak M.V. passed under the patronage of another authority Ivanov A.V. and was instructed to lead the recently created company April LLP for money laundering and other operations.

The first contract of April LLP is the "turnkey" restoration of the Church of the Assumption of the Virgin in the city of Pskov on Kalinin Street. The company received the money for the repair in full, the work was completed by 10%, after which the repair of the temple was stopped (the corresponding materials and invoices are in the archives of the temple).

In 1993, the organized crime group A. Ivanov, having presented irrefutable facts of the theft of state funds during the construction of the Kunichina Gora and Shumilkino checkpoints to the director of the Rostek-Pskov State Unitary Enterprise, S. Dmitriev, involve the latter in joint activities. This is how Rostek-Terminal CJSC was created, the director of which was appointed MV Bryachak, who proved himself “positively” in April LLP.

Dmitriev S.V. receives a 6% stake in Rostek-Terminal on the following terms:

Bryachak M.V. during the year pays, in addition to the share (in fact 50%), 1,300,000 US dollars personally to S.V. Dmitriev. for fixed assets transferred to Rostek-Terminal.

Money Dmitriev S.V. never received, however Bryachak M.The. before the organized criminal group Ivanova A.The. fully accountable for them. The theft of money was found out only during the move Dmitrieva C.The. to Moscow at the end of 1999.

Through Moscow, support was provided through the Secretary of the Union State of Russia and Belarus Pavel Borodin and businessman Garry Luchansky. The bulk of illegal income was obtained by understating customs payments, the cost of goods, and registering goods using forged documents. The following method was used - registration of goods from countries of double taxation as from countries with the most favored nation regime.

According to a source of Rucriminal.info, at the same time Bryachak M.V. brings the leader of another organized crime group closer to him - Budarin V.O. and makes his people his own security service. From a forwarding agent to Deputy Director of CJSC "Rostek-Terminal" Bryachak M.V. appoints 10 people from this criminal group.

In 1993, on behalf of Volkhonov, Budarin organized an attempt on the life of one of the leaders of the organized criminal group in the city of Pskov, IM Evdokimov. As a result of the explosion of the car, Evdokimov's wife dies, he is seriously injured.

For the delegation of "criminal business" the council of the organized criminal group of the city of Pskov, consisting of the leaders: Ivanov A.V., Chabonenko V.G., Korobov V.Yu. and Budarin V.O. begin to bring their "especially significant" connections into contact with Bryachak M.V.

Ivanov Anatoly Vasilievich, after the murder of Volkhonov, becomes his successor. The main organizer of the activity is LLP "April" and CJSC "Rostek-Terminal". The main activity is the smuggling of non-ferrous metals. Since 1994 he has close contacts with the "Malyshevskaya" organized criminal group in St. Petersburg (Shemetov AN - "Utyug", Karankevich IV - "Head").

Since 1997 Bryachak M.V. begins to actively engage in the sale of decommissioned vehicles of the 76th Guards V.D.D. (despite the fact that the equipment was on storage - new). Colonel A.V. Grachev, chief of rear services of the division, is involved in criminal activity.

At the same time, he is involved in criminal activity through A.V. Grachev. the chief of the financial service of the division, Colonel Parkhomenko.

Bryachak M.V. money is needed to create the "largest", according to him, the company for road transport, and he, together with Ivanov A.V. and Grachev A.The. offers Parkhomenko "to make easy money" on underpayments of the so-called. "Combat" soldiers and officers who took part in the hostilities in Chechnya.

In total, Parkhomenko gave Bryachak M.V. over 1 million US dollars in exchange for shares of CJSC Rostek-Terminal, which were registered in the name of Parkhomenko's daughter.

After opening the embezzlement, Parkhomenko was fired.

The shares of CJSC "Rostek-Terminal", registered in the name of Parkhomenko's daughter, turned out to be "fake".

Parkhomenko's repeated attempts to return "his money" were unsuccessful. Bryachak M.V. flatly refused that he received them. After this conflict, continue to work with M.V. Bryachak. refused Ivanov A.The. and Grachev A.The. They departed from Bryachak M.V. and the organized criminal group of Chabonenko and Korobov, but the organized criminal group of Evgeny Ivanov, specializing in drug trafficking, joined.

In the fall of 2000, Parkhomenko was convicted of the murder of I. Gorbunov. As it turned out during the investigation, after getting drunk that day, Parkhomenko went to kill Bryachak, but on the way he met his debtor, with whom he had a conflict and shot him.

By the end of 1998, MV Bryachak, using his close connection, the commandant of Grozny, Colonel Babichev, and "Moscow connections", began active work to gain access to financial flows aimed at restoring Chechnya.

Bryachak M.V. sets a task to his deputy R.U. Shaikulyev. establish contact with the representative of Maskhadov in Estonia (Tartu) Tangiev.

Tangiev meets with Bryachak in Pskov and they agree on cooperation:

- Bryachak M.V. receives in Chechnya at "bargain prices" a brick factory, a wine-vodka factory and an oil refinery.

-Tangiev gets the opportunity through Bryachak to earn money and organize "green corridors" on the border.

Tangiev was responsible for the financial support of N.V.R. in Chechnya, had quite large powers from Maskhadov.

In 1999 Bryachak M.V. prepares to take part in the gubernatorial elections. Shaikulyev is instructed to raise more than $ 2 million for the election campaign by mid-1999.

Elections in 2000 Bryachak M.V. loses. Again, there is a period of lack of finance. Shaikulyev, in turn, begins to demand commissions for "his work", and not just a salary. A conflict flares up between them. Bryachak M.V. scares Shaikulyev with V.O. Budarin. Shaikulyev is forced to seek protection and goes under the "roof" of A. Miroedov ("Mirych").

Shaikulyev's self-righteousness is brought to Bryachak M.V. to the point of rage. In August 2001, Shaikulyev was found with a bullet in his head near the gate of his house.

After the funeral of Shaikulyev R.U. in his place is appointed an active member of the organized crime group Budarin Katkov Alexander Gennadievich (nicknames: "Kisa", "Small", "Skating rink", we judge, inadequate in behavior, a drug addict).

Attention is drawn to the fact that since 1999 a whole series of murders of people who were very close at one time to Bryachak M.V., but with whom before the murder at Bryachak M.V. conflict situations occur.

Asaryan V.K., killed in 2001 (prosecutor of the Pskov region)

V. Popov, killed in November 2003 (a former employee of Rostek-Terminal CJSC, created his own business, after which he constantly clashed with Bryachak)

A. Basin, killed in 2006 (lawyer M. V. Bryachak, at his direction tried to bankrupt the plant "Pleskava")