The story of the summer search of the house of the ex-general director of "TransFin-M", a member of the London Titov list Dmitry Zotov, was continued in the Tverskoy Court of Moscow. Back in June, representatives of the entrepreneur stated that the investigative actions took place with serious violations of the Code of Criminal Procedure of the Russian Federation. While people in masks and with machine guns searched the apartment building and other premises for 15 hours, the lawyers of the Zotov family stood behind the fence: the operatives simply did not let them into the territory. The defenders were able to get to the principals only after calling the hotline of the Ministry of Internal Affairs and the arrival of a police squad.

As it turns out later from the complaint of the lawyers of the Zotov family in accordance with Art. 125 of the Code of Criminal Procedure of the Russian Federation on the actions of the investigator, the violations committed during the search turned out to be really serious. Therefore, the Tverskoy Court of Moscow, instead of refusing according to the standard scheme, accepted the complaint for consideration on June 14, 2021.

4.5 months later, after repeated transfers (either they forgot to send the materials from the Main Investigation Department, or the prosecutor did not appear), on October 27, the complaint was considered on the merits.

The lawyer of the Zotov family presented the court and the prosecutor with evidence proving the illegality of the investigative actions. As it turned out from the materials presented, only ONE Zotov's house with a specific address and cadastral number was indicated in the court decision to conduct a search. And in fact, they searched and seized materials from two different houses, not just detached, but also having different cadastral numbers, different addresses and even, according to an extract from the USRN, located in different settlements - the village. Gorki-2 and the village of Soloslovo.

It would seem that if the operatives realized that there was a need for urgent investigative actions and that it was necessary to look for it in the second house, then legitimize what has already happened, as required by Part 5 of Art. 165 of the Code of Criminal Procedure of the Russian Federation, you have three days for this after the search.

But the investigators of the Department of Internal Affairs of the 12th Department of the Investigative Department of the Main Directorate of the Ministry of Internal Affairs of Russia in Moscow did not bother with such a trifle as compliance with the Criminal Procedure Code. What puzzled both the judge of the Tverskoy court, considering the complaint, and the supervising prosecutor, who was so dumbfounded by the documents presented that he requested a break for another month.

The supervisory agency has four whole weeks to form a position in relation to the clearly illegal actions of comrades from the State Investigation Department and to react within the framework of prosecutorial supervision. The next meeting of the Tverskoy court on the complaint is scheduled for November 30. It is noteworthy that the complaint is considered by the same judge who issued the order to carry out investigative actions, to ONE address, and not to two.

This is not the first surprise that awaits the customers of the criminal case against Dmitry Zotov in the Tverskoy Court of Moscow. Recall that on June 8, 2021, an attempt to send Zotov to a pre-trial detention center also failed. Then the judge Krivoruchko refused to detain him and kept the businessman's recognizance not to leave.

The customers of the criminal case against Zotov are persons from among the new top management of PJSC TransFin-M, as well as the owner of the GC “Maxima” Nikolai Falin and his nominee director Roman Davydov who entered into a criminal conspiracy with them.

According to the source, the Maksima Group of Companies - one of the largest Russian operators of railway cars and logistics centers - had been searched. The events took place within the framework of case No. 12002450002000180, initiated by the Criminal Investigation Department of the HLW Main Investigative Directorate of the Investigative Committee of the Russian Federation in Moscow on the grounds of a crime under Art. 170.1 of the Criminal Code of the Russian Federation. They were looking for documents related to the raider seizure of assets under the management of Nikolai Falin's former partner, the general director of the Maxima Group of Companies. In addition, the version about the connection of the owners of the company with the case of Colonel Dmitry Zakharchenko is now being checked. But that's not all. The operatives are interested in the involvement of three beneficiaries of Maxima Group in the cash-in and withdrawal of funds to offshores - Nikolai Falin, Oleg Tsitsiy, Maxim Kunayev and the head of the legal department of Maxima and concurrently the nominal director of a number of LLCs belonging to the GC, Roman Davydov.

Initially, operational-search measures were carried out to identify persons from the GC "Maxima" involved in the weaning of business in a criminal way. At the same time, other facts were revealed related to cash transactions and the withdrawal of assets to offshores with the help of Falin's trustee, Maxim Kunaev, with the participation of Kunaev's mother, Elena Akimovna Kunaeva.

It turned out that it was Maxima's financial director, and concurrently the owner of the Cyprus-based Dinasino Holdings Limited (DYNASINO HOLDINGS LIMITED, Cyprus), Maxim Kunaev, who invented a scheme for withdrawing funds to offshores. It is assumed that here with her son "shared the experience" of the implementation of similar projects El Ena Kunaeva, ex-head of the center for corporate transport services of Russian Railways and a former member of the board of directors of TransContainer.

The identity of Elena Kunayeva has already surfaced in a number of criminal cases related to the odious Colonel Zakharchenko and bribes from the top managers of the 1520 Group of Companies. But then the possible active participation of Elena Kunaeva in illegal schemes did not find sufficient confirmation.

Entrepreneur Zotov D.A. - the former General Director of PJSC Transfin-M during the period of time, who worked from 03/27/2013 to 11/14/2018. The company was engaged in the leasing of railroad cars. At the time of the departure of D.A. Zotov. from the company, net revenue amounted to 51 billion rubles, the organization showed good financial results and was among the fast-growing, profitable investment organizations. The company was bought by new owners and began to persecute former employees, extorting from each of them as much as they could squeeze out, threatening to put them in jail. 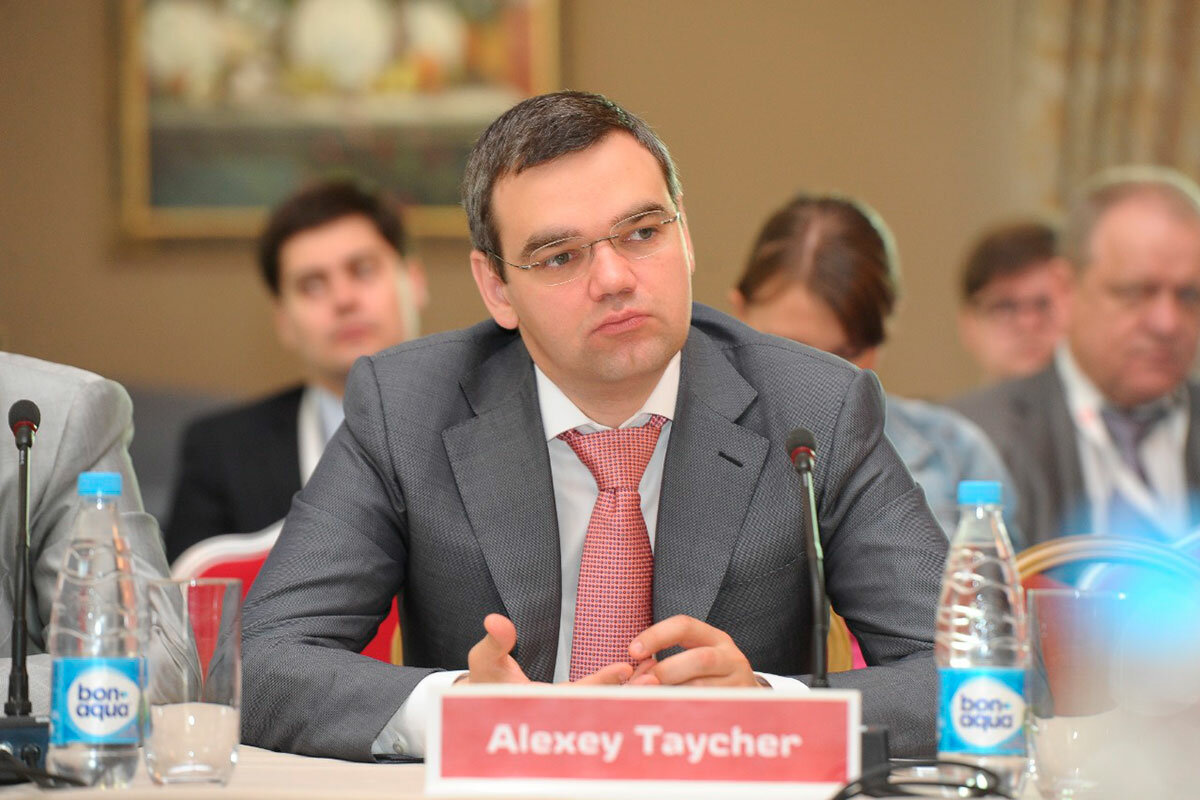 So, after the dismissal of D.A. Zotov. in the TFM company the composition of owners and employees has changed. The chairman of the board of directors and the actual owner (70%) since November 2018 has become a man with a great past - A.R. Taicher (ex-advisor to the head of PJSC Russian Railways).

And this is where the fun begins. The main owner of the TFM company was the non-profit pension fund Blagosostoyanie. The new owner of TFM is the effective manager of Russian Railways A.R. Tycher bought a profitable company without a ruble of his money. He turned the scheme by taking money from the Balgosostoyanie pension fund and used it to pay off his loan from VTB Bank, taken for the company he was buying (Transfin-M). The deal cost pensioners 32.6 billion rubles.

By the way, in June 2019, the Federal Antimonopoly Service of Russia blocked this transaction, stating that the presence of Russian Railways management in the market raises "questions".

The large-scale history of the theft of leasing assets of the granddaughter of Russian Railways would be incomplete without highlighting the role of one of its main participants, who, taking advantage of the location of the Russian Railways Security Department and Alexei Thatcher Rotenberg, who is behind the purchase of the largest leasing company Transfin-M, decided that it was time to act ... When his candidacy was lobbied for the post of head of the Security Council "Transfin-M", he felt a real surge of strength and scale. Meet the former employee of the Ministry of Internal Affairs Oleg Borisov. By the way, he changed his last name in order to get away from the brighter, Transcaucasian, which apparently interfered with his career in the Ministry of Internal Affairs. But I have not forgotten my roots and my fellow countrymen. One of them, by a completely coincidental coincidence, works as a big boss in the Transport Directorate of the Ministry of Internal Affairs of the Central Federal District, which we are conducting the case against Zotov.