“4K spherical cameras with a 360-degree view” for 3.5 billion rubles turned out to be consumer... 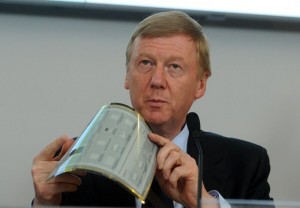 The Moscow Arbitration Court received an Application from the MINISTRY OF INDUSTRY AND TRADE OF THE RUSSIAN FEDERATION (Case No. А40-283602/2021) on the recovery of 199,873.4 thousand rubles from the RUSNANO project company JSC ELVIS NEO TECH.

This story was described in detail by the telegram channel of the VChK OGPU in August-September 2021. Then RUSNANO was already ready to initiate a criminal case against the former heads of the state corporation Oleg Kiselev, Dmitry Pimkin and the shareholder of ELVIS NEO TEK JSC, but still, the Asnis and Partners law office did not receive more than two hundred million a year under Anatoly Chubais for nothing. The case was wrapped up, the facts were rigged, and the new head of RUSNANO Kulikov was convinced. Rucriminal.info tells the details. In 2016, ELVIS-NeoTech JSC, in accordance with the Subsidy Agreement No. 16411.1930168580.11.023 dated October 17, 2016, concluded with the Ministry of Industry and Trade of the Russian Federation, undertook to implement a comprehensive project "Development and organization of mass production of a spherical video camera for recording, broadcasting and publishing video images in 4K format with a 360 view. The effectiveness of the project implementation should be assessed through the volume of production and sale of import-substituting and innovative products created during the implementation of the project, which should be at least 130.8 million rubles.

Money from the state in the amount of 300 million rubles. were received and very quickly cut and eaten. The very “spherical video camera for recording, broadcasting and publishing video in 4K format with a 360 view” was never created or even tried to be created. For reporting, we bought a couple of dozen Chinese cameras, dismantled, assembled, re-glued the labels and wrote many sheets of “fake” technical documentation.

As for sales of 130.8 million rubles, they decided not to strain too much here either: somewhere in the garbage he found the company GCC EM LLC and shipped to it “on paper” products immediately as much as 143 million rubles.

It seemed that this time everything went well for ELVIS-NeoTech JSC: the products were sold, technical reports were written, and reports were submitted to the ministry.

The specialists of the ministry did not like the report, and the question immediately arose about paying for the shipped products - it turned out that out of 143 million rubles. of shipped products, only a little more than 6 million rubles were paid. (It was possible to show large volumes only by a technical run of money through the accounts, which is not easy and, most importantly, very costly). And then there's also the company LLC "GCM" successfully liquidated, because the garbage heaps do not last long.

According to a Rucriminal.info source, the situation for ELVIS-NeoTech JSC became catastrophic - everything went to the return of the subsidy and the payment of a fine, but such a turn of events was not included in the plans of innovators from Rosnano JSC, because the money from the subsidy had long been outside the company.

The second round of “scheme creation” has begun: within the framework of a large state project, ELVIS-NeoTech JSC supplied 30 thousand video cameras to 5.5 thousand schools across the country. True, the cameras were quite ordinary, made in China: not spherical, not 4K, and without a 360-degree view, but who's to stop wishful thinking? According to the new legend, the Ministry of Industry and Trade of the Russian Federation was offered to count the entire proceeds of ELVIS-NeoTech JSC from the sale of video cameras to schools in the amount of 237 million rubles into the subsidy report.

But the Ministry of Industry and Trade of the Russian Federation again saw through the scam and did not recognize the proceeds from the sale of video cameras to schools as a report on subsidies.

Today, the Ministry of Industry and Trade of Russia is taking the right and logical step by demanding the return of funds to the budget of the Russian Federation.

And what about the new management of RUSNANO?

The beginning was promising: an audit of the activities of ELVIS-NeoTech JSC, a change in leadership, analytics for the security service.

By the way, during the audit, a fraudulent scheme for the withdrawal of funds and intellectual property was identified and described (we are talking about a 40 nm VIP1 chip chip, which is of strategic importance for sensitive industries) in the amount of about 2 billion rubles (the corpus delicti under Part 1 of Art. 2 article 147, part 4 article 159.6, part 4 article 160, parts 2 and 3 article 189 of the Criminal Code of the Russian Federation). At the same time, all documentation, all technologies and materials were transferred to the foreign company SDA, which was under the control of the RUSNANO project participants.

By the end of 2014, the 40 nm VIP1 microprocessor had already been "worked out" by a group of people and "similar" prerequisites were created for a similar "working out" of VIP2 (ELISE/Capri). Under this “so-called. development” RUSNANO increased the project budget and allocated new, additional funding.

According to the source of Rucriminal.info, the “result” of the development of 3.5 billion rubles can be seen by visiting the plant of JSC Elvis NeoTek in the capital of Russian and Soviet microelectronics, the city of Zelenograd. You will not find any production here at all, there is nothing but beautiful, leased office space. But on the other hand, you can all follow the travels of the former project manager Elvis Neo Tek from RUSNANO (Dmitry Pimkin) on the instagram of his wife, Olga Pankratova, and the Cheka OGPU also wrote about this recently. And on Instagram you can also find a photo of Olya’s dad (Dima Pimkin’s wife. This is the lawyer Pankratov Vladimir Vasilyevich, who works closely with Asnis and Partners, receiving part of the RUSNANO remuneration.

Do you understand everything now?

Where RUSNANO is, there is always "mutual responsibility" and large-scale theft.