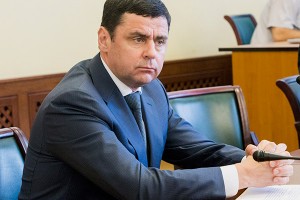 In 1990 he finished on the Moscow Higher Military Command School e them. The Supreme Soviet of the RSFSR, a diploma and the title of lieutenant in a solemn ceremony at Red Square in Moscow.

From 1990 to 2013 he served continuously in various positions in the KGB and state th protection of the Russian Federation.

February 18, 2014 by the decree number 86 of the Russian President was released from the former position and appointed First Deputy Chief of the Criminal Investigation Department of the Interior Ministry while assigning a special rank of police major general.

On May 12, 2014, by Presidential Decree No. 332, he was relieved of his previous position and appointed head of the Main Directorate for Economic Security and Anti-Corruption (GUEBiPK).

December 23, 2015, Presidential Decree No. 657 was relieved of his former post and appointed Deputy Minister of Internal Affairs of Russia Vladimir Kolokoltsev.

February 16, 2016, in parallel, order of the President of the Russian Federation has been appointed Executive Secretary of the Working Group on Monitoring and analysis of enforcement practices in the field of entrepreneurship.

February 20, 2016 by the Decree number 73 of the Russian President received another special rank of police lieutenant general.

July 27, 2016 Dmitry Mironov was summoned for a conversation with Russian President Vladimir Putin, when he was appointed acting Yaroslavl region before the election of the Governor in September 2017.

Order "For Services to the Fatherland» IV degree with swords,

According to Kommersant sources, the appointment of Deputy Minister of Internal Affairs Dmitry Mironov, the provincial governor of the Yaroslavl region, is directly related to another appointment - Alexei Dumina, the provincial governor of the Tula region, in February this year. Mr. Mironov, like Mr. Dumin, worked for many years in FSO and was close to President Vladimir Putin. Mr. Dumin rose to the deputy chief of the Security Service of the President of the Russian Federation, and Mr. Mironov, as Kommersant sources say, was one of the adjutants of the head of state. In 2013, both were transferred from the FSO to other law enforcement agencies. Alexei Dyumin headed the Special Operations Forces, and Dmitry Mironov joined the Ministry of Internal Affairs.

An unusual order from the top came in the last academic year in all schools and kindergartens of Yaroslavl. They were asked to place photos of the recently appointed governor Dmitry Mironov on the stands next to the portraits of the president and prime minister.

Scandal with the "cult of personality" had to be urgently leveled. The initiative was attributed solely to the employees of the Department of Education, and its leader was roughly punished by forfeiture of the post. However, the question whether this was primarily a sycophant or an unsuccessful attempt to "document" the regime of authoritarian power in the region "remained open.

- Mironov in the region was waiting for the fight against corruption, but not a single high-profile criminal case was instituted for a year, and all dark schemes continue to exist. Those officials who are not ready to work on them, are subject to dismissal, - says Alexei Yakovlev.

The main scam, he calls the establishment of a single information and billing center. This private structure was given the authority to collect fees for housing and communal services from the whole region. Against the creation of such, in the words of journalists, "feeding troughs for their own" was made by the regional department of the FAS, but immediately after that his leader had to quit.

Journalist "Beach" newspaper, which comes out in Tutaev Yaroslavl region, said that he was forced to resign after he criticized the protection Acting Governor Dmitry Mironov region.

Alexei Kravtsov explained that he was told that if he did not leave himself, he would be fired according to the article, "Medusa" reports.

"Yesterday, Dmitry Mironov, the governor of the Yaroslavl region, came to Tutayev. I noticed that only Mironov has a guard. My beloved Anatoly Lisitsyn and his successors Vakhrukovs and Yastrebov did not seem to use guards ... What are you afraid of who put your GDP into the province? Residents of the Yaroslavl region are quiet and peaceful, and when the boss fences himself with protection, this is not really an order ... And this protection is rude and swears. While driving me away from the delegation, I was rude and threatened, despite the presence of a badge, which indicates my belonging to the media. Now it is clear why D. Mironov is so pleased. He is protected, but he does not fulfill his promise. "

As told Kravtsov, his colleague was issued a warning for the likes and comments in Facebook.

Earlier, the chief editor of the Regnum branch in Yaroslavl, Alexei Yakovlev, was fired. The reason for the dismissal was a series of critical publications dedicated to Mironov.

Information about personal life, family and children is not published in any source.

... If he wins. As it turned out, United Russia did not think to steal so much from the budget of the depressed region. He only lent them. And return them right after winning the election from the family budget. More precisely, from his wife's pocket. About this Mr. Mironov said in a comment to correspondent 34374.ru.

Since early 2017, the authorities of the Yaroslavl region have concluded 33 contracts with the media to inform citizens about the work of the provincial governor, the candidate for the post of head of the region from United Russia Dmitry Mironov, as well as the executive bodies subordinate to him. The total cost of the contracts is 21.99 million rubles.

Ali Uzdenov had previously been familiar with Gazprom's top manager Kirill Seleznev. But on a new level of relations with Seleznev, Uzdenov and "Peton" switched, when Dmitry Zakharchenko, who has long been familiar with the top manager of Gazprom, asked for assistance in this structure. Moreover, Seleznev probably explained that "Peton" is not only criminal businessmen like the Polyakovs and Gasanovs, but a large group of Russian Interior Ministry officials of the highest level, whose problems nobody needs. Especially Seleznev, behind which stretches a huge train of various dubious stories. And these were not empty words, but they were confirmed by concrete actions.

So, the firms that were going to compete with Peton for the right to enter into contracts with Gazprom, were told "in the forehead": you will get in the way - get problems with GUEBC and "tax". The last structure was called at all by chance. Representatives of GUEBC and the Russian Government established partnership relations with the Interregional Inspectorate of the Federal Tax Service of Russia for the largest taxpayers No. 2, which is controlled by Gazprom. Apparently, a special friendship among the representatives of the Bashkir vertical formed with the deputy head of the IFTS № 2 Sergei Andrianov.

As a result of this amount of state contracts concluded with "Peton", invariably grow every year. Everything is decided on the flow. And the arrest of Zakharchenko, as well as the dismissal of Tishchenko, did not affect the process at all. Kurnosenko and other heads of GUEB & PK remained at their posts. In the name of Dmitry Mironov (former deputy interior minister and now a governor of the Yaroslavl region), they did so, that "Gazprom" has begun to ship "PETON" state contracts at all on bezkonkursnoy basis.