Jan Abramov Member of the Board of Directors of the "Three-D Bank". 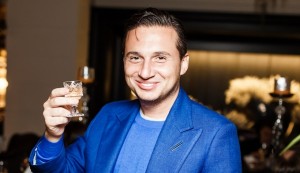 Read this text in Russian
Имя: Jan
Фамилия : Abramov
Отчество : Rafael vich
Должность : Member of the Board of Directors of the "Three-D Bank".

His father - a well-known businessman and banker Raphael Abramov.

D 1994 he graduated from high school № 27 of the Khatai district of Baku.

After graduating from high school, he went to Baku to continue their education in the United States. There he learned three foreign languages - English, Spanish and Portuguese, became interested in basketball and started his business.

In 2001 he participated in the creation of the Russian-American Business Council. Later, he began to publish the magazine "America" (in partnership with Konstantin Borovoy).

Since 2002, he served as chairman of the board of directors, and now owns a 20% share in LLC "New weapons technology."

From 2002 to 2012 he was president of NP "Moscow Pyrotechnic Association" since 2013 - chairman of the board of trustees, the vice-president of the Russian Association of Manufacturers and demonstrator Fireworks "RAPID FIREWORKS".

In 2016, he became a shareholder of the company "Galaxy", which is developing the eponymous enterprise management system (ERP), and became Chairman of the Supervisory Board.

Under the leadership of Abramov of "new technologies" adjusted release of the most famous to date in Russia traumatic weapons OCA.

In 2011, he received a master of law degree towards jurisprudence of the European Studies Institute at MGIMO (University) MFA Russia. Candidate of Law (MGIMO).

Abramov is interested in basketball, a long time was the vice-president of the Moscow Basketball Association.

In 2006, he married the popular singer Alsou. He has two daughters and one son.

Ian Abrams is a successful businessman. But not everyone knows that, in the main, his business he had inherited. Family Abramovyh - is a clan, like they say in the media. Some sources even called Abramovyh of the real mafia. However, the association with the mafia for Jan is understandable. The fact that he is the director of the largest production to date traumatic weapons in Russia. In addition, Ian called "pyrotechnic tycoon" because it also manages the production and marketing of pyrotechnic materials. Among other things, Yan Abramov also directs the Joint-Stock Company "New technologies".

Yanik Abramov first lit in high society in 2004. Then, at a party in the Ferrari-Maserati Tretyakov passage, he was introduced as the official satellite Ksenia Sobchak.

Pyrotechnic business Yana Abramova (friends call him Janik) was created with the direct assistance to relatives and does not go to any comparison with the turnover of the whole clan.

March 18, 2005 the builders were to knock out frame of the windows hotel "Russia". Editor of investigations "Express Gazeta" Vladimir Pozharsky with counterpart Dmitry Lifantsevym conducted survey.When Pozharsky choose the desired angle, standing on the sidewalk with a camera in his hands, he pulled up next to him a foreign car. Passenger glass dropped, and sitting in the car Yan Abramov grabbed the camera and pulled to her. Pozharsky hand was tightened to the elbow in the salon. Immediately the driver sounded the team: "Goni" He stepped on the gas, and Pozharsky dragged behind the car. Journalist miraculously broke his hand, but hit his head on the door. A car pulled up ten meters, and Abramov, seeing that he could not take hold of the camera, pulled out of the camera's flash card. Throwing robbed Pozharsky on the roadside, the car left behind a cordon.

Chopovtsy with carbines at the ready surrounded the journalists and hung them in her arms, dragged him to the hotel. The journalist Rustam Solntsev on the road received two blows in the stomach. He lost purse on top and a video camera.

Vladimir Pozharsky asked the internal affairs bodies, where opened a criminal case. As he explained the detective of the Criminal Investigation Department, "Abramov this act is regarded as robbery, that is punishable under the Criminal Code of the Russian Federation for a period of 3 to 7 years."

In 2006, singer Alsou married a businessman Yan Abramov and media presented to the public her groom as king pyrotechnic market. Yana Abramova have been share in the pyrotechnic company "Great holiday", and for some time it was presented in the media only as the head of the Moscow Pyrotechnics Association, which, as they say market participants, it is for themselves and created. But today Abramov pyrotechnics interested enough. It is involved in the affairs of the Russian Jewish Congress, and the media reported that the company "New weapon technologies" under his leadership has adjusted release of the most famous to date in Russia traumatic weapon "Wasp". Address of the company, however, matches the address NIIPH that the developer himself "Wasps" believes, too.

The singer has persuaded her husband Yan Abramov make with it a special Muslim ceremony - tors. He was held in secrecy at home father Alsou - Ralif Safina - in the Bashkir village Uyandykovo.

Nikah - this is one of the most important events in the lives of Muslims, he is spiritually transforms strangers to each other people in the husband and wife. But in this case it was a serious obstacle - the husband must be a Muslim! Since Yang agreed to scrupulously fulfill all that is required during a sacred ceremony (on Abramov was even a traditional Tatar skullcap), an exception was made for him. In the eyes of the mullahs, he was at the time of a full-fledged Muslim sacrament.

March 18, 2006 Alsou married businessman Yan Abramov. The wedding, which was attended by the entire Russian elite, distinguished by large scale celebrations. Marriage certificate received from the hands of Mayor Yuri Luzhkov, and from parents and guests got the money, a country house in Moscow, jewelry, a car "Bentley". The official part was held in the concert hall "Russia" honeymoon spent on the island of Fiji.

In 2006, in Gorno-Altaisk at the walls of the State Assembly held a rally whose participants - young athletes - protested about the possible re-election of a senator from the Altai parliament Ralif Safina. The picket was not sanctioned by the city authorities, and returning from lunch officials working in the State Council, we were very surprised by what is happening. Young people launched the sheets of paper with the slogan, "Safin, return our money", "Shame Safin", "Safin has not justified the confidence." They also handed out leaflets on which was carried the story of the wedding of the daughter of a senator with the banker Yan Abramov. The article said that the wedding cost Altai former Senator of $ 15 million, while, according to the picketers laconic sport in the country is in distress.

September 11, 2008 Ministry of Internal Affairs and ICPO officers raided six AST Group markets, including the market "Eurasia" and the China-Arab market. At the same time a search was held in the branch office of the bank, "local credit" (MK-Bank), located in the "New AST" of the market. "The proceeds from the smuggling of goods sold in the markets, accumulated in the same structure, and only then" laundered "and spreads the bills, - said a source in the Interior Ministry. - As the "MK-Bank" is located on the territory of the market, its services are used by many traders, so there were carried out investigations. "

Chairman of the Board of Directors and co-owner of the bank "local credit" is an entrepreneur Rafael Abramov - father Ian Abramov.

The searches were carried out in a large scale and controversial investigation, which was launched in the spring of 2005. Then 29 cars were detained smuggled goods from China that resulted in the Moscow warehouse of one of the military units of the Federal Security Service.

According to "Rosbalt", the chairman of "local credit" of the board and co-owner of the bank is an entrepreneur Raphael Abramov. His own son and head of the firm "Local credit invest" Yan Abramov married to a famous singer Alsou. At the wedding of young people in 2006 and attended the businessman Telman Ismailov, who owns the group "AST" and shopping center "Cherkizovsky".

Singer Alsu with her husband Yan Abramov and two daughters in the near future will move to a luxurious mansion on the ruble. Building a house on Rublevo-Uspensky highway should be completed before the end of this year.

As it became known Znak.com, singer Alsou husband businessman Yan Abramov agreed with Governor Yevgeny Kuyvashevym of a major project for the construction of greenhouses, which can be grown all year round tomatoes and cucumbers. Its cost is estimated at 17.3 billion rubles. It is expected that under the new greenhouses will allocate 100 hectares of land under the Verkhnyaya Salda, and one of the scenarios, it can become part of a special economic zone "Titanium Valley".

Lobbyist agricultural project is personally Governor Yevgeny Kuyvashev. According to Znak.com, his Ian Abramov introduced Industry Minister Denis Manturov, with whom the governor approached in connection with the Yekaterinburg "Innoprom". As a result, Kuyvashev with Abramov met several times and found a common language.

Businessman Yan Abramov became a shareholder of the company "Galaxy", which is developing the eponymous enterprise management system (ERP), and became Chairman of the Supervisory Board of the company, told "Kommersant" two person on the IT-market. "As a board member of the" Galaxy ", he appeared at the recent exhibition" Innoprom "", - said one of the "Kommersant" interviewees. Two Sources "Kommersant" claim in the market that Yan Abramov could purchase a package in the amount of 25% to 50% of the company. "The seller may, might perform the widow of President" Galaxy "Krasilova Nicholas, who died in 2014," - says one of the "Kommersant" interviewees. Chairman of the Board of "Galaxy" Dmitry Chernykh declined to comment.