Ali Uzdenov First Vice-President, Downstream and commerce, a board member of the ANC "Bashneft" 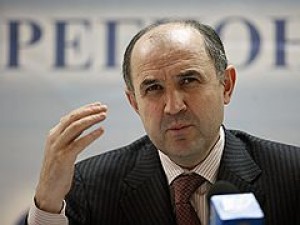 In 1985 he graduated from the Rostov State Railway University (formerly RIIZHT) on a specialty "Electrical engineer", then - went to graduate school, he taught at the Department of "Automation, Remote Control and Communication" in the native Institute until 1993

From 1987 to 1989 he was secretary of the Komsomol committee RIIZhTa.

In 1989-1990 he studied at the International School of Survival (Italy), then worked for four years at UNESCO, was the head of the direction for the coordination of work in the East.

In 2003 and 2008 he was elected to the Legislative Assembly of the Rostov region.

Since October 2009, he was appointed first vice president of commerce, then - the first vice-president for processing and commerce in ANK "Bashneft".

August 1, 2012 the Board of Directors decided to terminate the powers of a member of the Management Board of OAO ANK "Bashneft", first vice president for processing and commerce Ali Uzdenova after his transfer to another job.

He was awarded the Order of Friendship of Peoples.

In 27 years, he was awarded the title "Honorary railwayman of USSR".

In 2012 he joined the hundred Forbes rating in the category "Power and Money", the association has created wildlife steppe in the Orel region.

He is married and has two sons.

Deputy of the Legislative Assembly of the Rostov region, Ali Uzdenov very belatedly revealed revenues for 2011

Uzdenov reported in return for 76,180,000 rubles. Personal vehicle he does not, but there are five residential buildings with total area of 233 square meters. m and 218 sq m apartment. m. Sources of income not specified.

More Uzdenova of the deputies of the Legislative Assembly has earned only the head of the Southwestern branch "Capital Savings" Harutyun Surmalyan (78 mln.) And former co-owner of the "Atlantis-Pak" Sergei Ryzenko (2 billion rubles.), Who sold the share in the last year company.

Transfer of land Uzdenova takes in the declaration a few dozen pages. In total it has 162 section marked "for ancillary services" (at 143.3 ha), 88 plots of agricultural purpose (4768.7 ha) and three sites for construction (2.5 hectares). All of them are in Russia.

Political career began in Uzdenova zero. He is considered a person close to the entourage of the former governor Vladimir Chub. Uzdenov twice - in 2003 and 2008. - Elected to the Legislative Assembly of the field, he is now deputy chairman of the faction "United Russia".

Ali Uzdenova called in the early 2000s. "Designated benefactor," said his friend. According to him, it was "a kind of token" from the Governor Chub, with the support of which Uzdenov created association "Wildlife of the Steppe". The organization is engaged in the protection of wetlands in the Orel region. Since 2007 Uzdenov chairman of the board of FC "Rostov".

Colonel Interior Ministry Dmitry Zakharchenko recently shook up its internet billions, not a few popular publications wrote about it, but few know that the modern biography Zakharchenko completely "painted" his countryman Ali Uzdenova.

Ali Uzdenov over the last decade gathered around him all oil and gas companies in the Rostov region to work with "Gazprom", thus created a holding company "Bashneft-south".

With Gazprom's government orders, the businessman wanted to get "their man" in the Office "T" GUEBiPK to clean power means any obstacles develop their business in the energy sector. At this point, and there was Dmitry Zakharchenko.

The aim of the alliance with the police, Ali Uzdenova businessman become contracting contracts in PJSC "Gazprom". A kind of "RDI NG" PETON "in recent years suddenly concluded with the gas monopoly contracts worth more than 100 billion rubles.

PJSC "Gazprom" has signed the largest corporate monopoly procurement contract in the history - in the amount of 50.337 billion rubles - no competition (in terms of procurement with a single supplier) with Ufa LLC "Research and Design Institute of Oil and Gas" PETON ".

Under the 'subject of the contract, "stated laconic" RMC "(construction and installation work). "Execution of the EPC model," - complements the picture comment section "Information about goods, works and services." The contract was signed on April 25, its implementation began in May and should be completed in December 2018.

Ali Uzdenov closely engaged in the business since the early 90s. He was the head of many companies, but the ultimate scope of its activities was the oil and gas industry.

He eventually created a large organization "Bashneft-Yug" Having worked in many companies in senior positions, which began to cooperate with "Gazprom".

But the oil and gas business is quite promising direction, from its competitors in this market are many. To score a place in the sun, we needed a reliable and faithful people in senior positions in the Ministry of Internal Affairs, it is desirable in the management of economic crimes.

Dmitry Zakharchenko, apparently, perfectly suited for this candidacy. Therefore, Uzdenova environment was strongly lobby for the young policeman and career colonel came up.

The price for such a rapid ascent was a proposal to eliminate their competitors in the energy sector. Using his influence in the Ministry of Internal Affairs, Zakharchenko began to clear the field from the oil and gas Uzdenova competitors.

State Duma deputy Mikhail Yemelyanov talked about corruption of the governor Vasily Golubev. From February to August 2013, according to him, the head of the region has made 23 flights on business aviation aircraft in the company of Ali Uzdenova (general director of marketing "daughters" of "Gazprom" in the Rostov region, the creator of "Bashneft-Yug" holding) and Konstantin Kuzin (the owner of "Megapolis" group).

After the arrest of the famous "golden" Colonel Zakharchenko began to emerge interesting details of his career. The investigation has not detected a single major case disclosed a colonel, but an interest in his career development. It turned out that Dmitry Zakharchenko walked confidently through the ranks due to familiarity with Ali Uzdenova - Vice President of the holding AFK "System". Now, investigators carefully study the causes of such "friendship" between the big businessman and a senior police officer. It is known that Zakharchenko began his career in the Rostov region, where Uzdenov while labored Director of LLC "Gazprom mezhregiongaz Rostov-on-Don".

Now Ali Mussaevich Uzdenov lost all his people GUEBiPK, but not the fact that he was left without support in the Russian Interior Ministry - it is necessary to protect their wealth. A guard there that - only in accordance with the tax return Uzdnovu owns five residential buildings with total area of 233 square meters. m and 218 sq m apartment. m., and 162 plots of land "for ancillary services" area of 143.3 hectares, 88 areas of agricultural land to 4768.7 hectares for the construction of three sections (2.5 hectares).