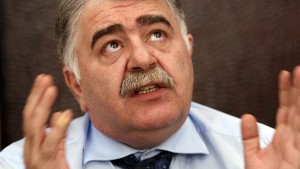 Born in Tbilisi in the Yezidi-Kurds family of a police captain and a librarian. My parents died when I was 10 years old Zelimkhan. According Mutsoeva, since that time he lived alone with his younger brother and sister Amirkhan he worked.

After school, he worked at a construction site dump truck driver. He served in the Army from 1979 to 1981.

He graduated from the Volgograd Institute of Civil Engineering (correspondence department of the Faculty of Economics and Construction) in 1989. He opened the sewing enterprise self-financing in 1987-1988. The first products - jackets down jackets. The company began to grow, there were branches in Ukraine, in Moscow, in Armenia. He moved to Moscow to head the Association of Foreign Economic Relations of the small and medium enterprises of the USSR, created in collaboration with partners.

Since 1998 - Chairman of the JSC "Pervouralsk New Pipe Plant" of the Supervisory Board.

Before his election to the State Duma of the Russian Federation was the general director of CJSC "Prominkor", Chairman of the Supervisory Board of OJSC "Pervouralsk New Pipe Plant" (Sverdlovsk region).

In 2007 he was elected deputy of the State Duma of the fifth convocation on a federal list of candidates nominated by the All-Russian political party "United Russia" (number five in the list of regional groups 69: Sverdlovsk Region), occupying the same position of Deputy Chairman of the Committee on Foreign Affairs.

He lives in Moscow.

Children - Amiran and Alex - are engaged in business in the GC "Regions".

Capital In 2004 Mutsoeva family founded the group "Regions" of companies, which owns 30 shopping centers in 22 cities.

The figure of 100 ha will take indoor theme park "Island of Dreams" in Nagatinsky floodplain, land lease for 49 years.

Partners With Gavril Yushvaevym (№68) in January 2013 bought out by Mikhail Prokhorov (№14) in Polyus Gold, and eight months later sold his stake to his brother Amirkhan Mori. At the end of 2014 passed the package co-owner "Industrial Union of Donbass" Oleg Mkrtchyan.

Politics Duma Mutsoev, kurdezid nationality, is in charge of foreign policy in the Middle East. Personally I escorted convoys in Baghdad and Kurdistan before the start of military operations in Syria.

Just came to be known results of the voting on the draft federal law "On Amending Article 50 of the RSFSR Law" On Environmental Protection ". It is this addition will bring into the Russian foreign SNF.

Construction can be for business from other industries means not only beneficial to attach the available funds, but also to find an occupation for grown heirs. The company "Regions", managed by the sons of the owners of AFK "Sistema" Vladimir Yevtushenko and Pervouralsk New Pipe Plant Zelimkhan Mutsoeva, will invest up to $ 800 million in the creation of a network of shopping and entertainment centers.

Vladimir Yevtushenko controls more than 60% of AFK "System" (revenues for 2004 to US GAAP - $ 5,7 billion, net profit - $ 411 million, the capitalization - about $ 7.5 billion, the largest asset - MTS, MGTS, "Comstar" "ROSNO", "Children's world", etc.). Forbes magazine put Evtushenkova 6 th place in the list of the richest Russian businessmen, estimating his fortune at $ 5.1 billion State Duma deputy Zelimkhan Mutsoev -. The head of the supervisory board and the owner of more than 40% of the Pervouralsk New Pipe Plant (PATH, revenues in 2004 - . 6.5 billion rubles, the capitalization - about $ 310 million). "Finance" magazine estimated Mutsoeva of $ 270 million (91 th place in the list of Russian millionaires).

The fact that firms controlled by senior Evtushenko and Mutsoeva on parity conditions established development company "Regions", "Vedomosti" said Amiran Mutsoev. Company management business entrusted to his sons - Felix Evtushenko, Amiran and Alik Mutsoeva. All three are included in the Board of Directors of "Regions". This information was confirmed by Felix Yevtushenko.

Appeared first loser in the elections to the State Duma. Sources in the "United Russia" reported that Moscow strikes from electoral lists the name of the State Duma deputy Zelimkhan Mutsoeva. Now Mr. Mutsoev work in Parliament from Pervouralsk single-mandate districts. Reason opals - carelessness in business, but the most important thing: the Kurdish diaspora in power, to which belongs and Mr. Mutsoev swiftly defeated on many fronts.About how Mutsoeva managed to enlist the support of legendary grandfather Hassan, why he sends huge amounts of money on a tiny island in the Sea of Marmara, and how the Russian Foreign Ministry deputy spoiled career Sverdlovsk - in our material.

... He was (and still is) a true member of the community and does a lot of other Kurds. As they say, he tries to help while it is in a Turkish prison island of Imrali in the Kurdish politician Abdullah Öcalan, nicknamed "Apo"; in Russia to raise funds for the national movement of the Kurds in Turkey and other countries. As a successful businessman and MP Mutsoev does a lot around the world for his people. Naturally, the relatives of Zelimkhan Alikoevicha in the government paid him the same, providing a stable and peaceful political future of doing business. Among the most influential of the Kurds - for example, the legendary kingpin nicknamed Grandpa Hassan, known sverdlovchanam as an opponent of the late leader of the OPS "Uralmash" Alexander Khabarova.

The scandal surrounding the Kiev hotel "Rus", whose owners have accused the Russian State Duma deputy Zelimkhan Mutsoeva illegally taking away their property, received an unexpected continuation. Available «URA.Ru» got the documents that prove the involvement of families Mutsoeva raider seizure of Ukrainian hotel, which previously Zelimkhan Alikoevich categorically denies. About that, through which firm carried out the Russian deputy "operation" that kind of woman it is the beneficiary, as well as doling comments Mutsoeva assistants - in the material "URA.Ru".

Zelimkhan Mutsoev his involvement in the events in Kiev categorically denied. "This is nonsense, I do not have any relationship to these conquests, nor to shopping centers," - said the deputy "URA.Ru" in the midst of the story.

Nearly a year and a half at the disposal of our agency were documents confirming the involvement of Zelimkhan Mutsoeva for conquest "of Russia." Thus, according to the documents, the action of the Kiev hotels have been issued to the firm «Deblin International Limited», registered in the Bahamas. In Russia, this company is located in Moscow at Potapov lane, 4, page 1 -. It is for this address are also offices Zelimkhan Mutsoeva. Phones offshore and receiving the same MP-businessman.

According to the documents, headed «Deblin International Limited» Kamal Chugani - the closest assistant Mutsoeva. A beneficiary is a Bahamian offshore Elena Mori. This wife of his brother Zelimkhan Mutsoeva - Amirhana.

Development company "Regions", controlled by State Duma deputy Zelimkhan sons Mutsoeva, became a partner of the confectionery group "Konfael" project shopping center in Krasnogorsk. Unfinished building area of 25 thousand sq. M. m was laid on the loan and got Novikombank developer at a discount: he paid for 75% of the approximately $ 50 million.

Earlier this year, "Regions" bought from the group "Konfael" torgtsentr construction area of 25 thousand sq. M in the suburban Krasnogorsk. m, according to "Kommersant" a source familiar with the deal. According to him, this object is pledged Novikombank, 20% owned by AvtoVAZ. This information was confirmed by co-owner of "Regions" Amiran Mutsoev and the head of the board of directors "Konfael" Irina Eldarkhanova. "The deal led himself" Konfael ". Now all the questions about the loans that the borrower the bank has settled ", - said the representative Novikombank. The amount of debt confectionery group, he did not disclose.

Police officers questioned Alikhan Mutsoeva in the case of the attack on Oleg Kurganov.

According Mutsoeva Jr., Oleg Kurganov angry at what his at a crosswalk missed SUV "Lexus", and started shouting abusive words to people in the cabin.

... 45-year-old Muscovite Oleg Kurganov, by contrast, claims that he was beaten by guards Mutsoeva Jr. in front of the building of the State Duma. According Kurganova, the incident began with the fact that he nearly fell under the wheels of the car rushing on the footpath in front of the entrance to the underground car park of the hotel "Moscow".

... Sam Barrows after the incident came to the hospital with a concussion and traumatic brain injury. He intends to pursue a criminal case.

Under Yekaterinburg Polevskoy tract recorded new mass felling of trees. As it turned out, the work carried out in the area of land on which the Russian State Duma deputy Zelimkhan Mutsoeva family plans to build an amusement park Dream Works Animation. Despite the fact that the governor had businessmen administrative support and assistance in obtaining site, GC "Regions" has not been able to begin construction of the facility.Meanwhile, the promises made by the authorities, already nearing fulfillment. Perm - the first phase of the ring road is under construction, which will connect the highway Polevskoi tract and Ekaterinburg will be introduced later this year. Because of this "Ekaterinburggaz" was forced to start the construction of a new pipeline to the Mountain Shield - old network hinder the construction of the road. The new pipeline had to pass on the border area of GC "Regions", but Mutsoev not let construction equipment on their land. By forcing contractors to cut down the forest to access specialized equipment to the site and build a network of a few meters from the proposed theme park boundaries.

Urban Development plan of the land plot on the territory of the Exhibition Center, which will be built the Ferris wheel, the Moscow authorities have approved at a meeting of town-planning-land Commission in June 2016. The investor of the project cost of 12 billion rubles. was a group of "Regions" family Mutsoeva, announced last week the company "ENEA" (100% in the Moscow Government), the management complex of the same name. In addition to the Ferris wheel is planned complex with indoor promenade, a multiplex cinema and an area with restaurants and cafes, the report says.

PrimeCrimeRu channel on YouTube has received a notice about the third-party claims of infringement of individual rights. This is a movie in which appears Zelimkhan Mutsoev imprinted on the bottom of the thief Birthday "in law" Rudolf Oganov in December 1997.

Mutsoev is visible place of honor for the thieves' table, where four out of five of the then it zastolnikov: Givi Gordeladze, brothers and Mamuka Mikeladze Jams and Romik Jafarov are operating thieves "in the law" until now.

Previously, due to the threat of criminal prosecution from the list of thieves "in the law" on the site of IA "Prime Crime" was excluded Mutsoeva younger brother, Mori Amerkhan Alikoevich, registered the Ministry of Interior of Russia and Georgia, as a thief, "the law" in 1998. This case has been described in an interview with one of the founders of the news agency "Big City" in October 2010.