Stealing several hundreds of millions rubles in Russia, running from justice to London playing a... Stealing several hundreds of millions rubles in Russia, running from justice to London playing a role of a victim of the violent regime – these actions constitute the typical behavior of a con man, who is being charged with large-scale theft. Such people usually lay low enjoying luxurious lifestyle, with open criminal cases in Russia having close to zero impact on their spending habits. There is no London-Russia extradition agreement, after all. Ilya Surkov’s story is one of many, but with one peculiar difference.

It is unknown whether extreme greediness or his emptying bank accounts drive Ilya Surkov’s actions. Vaguely though emphatically he hints to his family relationship with Russian president’s advisor Vyacheslav Surkov in attempts to enrich himself with money from London investors and Russian diaspora, promising the former shares in a successful real estate business and the latter – resolution of delicate matters in the motherland.

A risky step for a refugee, such a family connection could make Ilya Surkov persona non-grata for Russian immigrants, the London establishment and even lead to his extradition from Great Britain. Relations between London and Moscow are not particularly friendly at the moment, so such behavior could be considered improper by Britain’s officials. Moreover, the so-called “relative” in Russia could react unexpectedly.

In Russia Ilya Surkov is charged with fraudulent affairs, including large-scale theft (Art.159 part 4 of Russia’s Criminal Codex). If convicted, he could spend up to 10 years in prison.

Russian officials negotiate with London on the subject of Surkov’s extradition. And they may finally strike a deal soon, since in May of 2019 the Nikulinsky district court returned to the legal investigation of Surkov case that has been open since 2013.

It was then that during his time as a president of Finstroy company, that Ilya Surkov stole over 380 million rubles. “Kommersant” wrote in 2013 that the money had been taken from the company’s accounts with forged documents and transferred to the accounts of Boulder Associated – Surkov’s company on the Panamanian Islands. There are confirmations in the case materials from the officials of Panama and Switzerland, that the money was received by Boulder Associated and further managed by Surkov as a beneficiary of the company.  According to the documents of the case, part of the funds were transferred from Boulder Associated accounts to Lilia Sennova After Surkov had been charged in December 2013, his wife Lilia Sennova, a citizen of Russia and Switzerland, has attempted to have the family property released, despite the arrest.

Following a bogus divorce Sennova filed a lawsuit to an arbitration court for a division of jointly acquired property. However, her penalty request has been rejected by the Moscow City Court.

It turns out the lawsuit was just a trick: Surkov and Sennova have been spending a lot of time together since their fictitious divorce even uploading their photos together as an illustration of their dolce vita.

The story of escape

“On December 13, 2013 Surkov I.A. absconded while being under house arrest,” – court materials say. Truth be told, the story of Surkov’s escape resembles a second-rate action movie. After investigation into his wrongdoings began, Surkov feigned illness and was transported to a hospital, which he soon left with the help of his accomplices. He went straight from hospital to the airport. On December 24, 2013 Ilya Surkov was declared wanted by Interpol.

Surkov had to leave much his wealth behind in Russia, dozens of land plots in Moscow suburbs, an apartment in the capital with an area of more than 300 square meters and a country house in Barvikha.

How to lose the stolen millions?

According to sources in the Ministry of Internal Affairs, Surkov acquired Greek citizenship even before his escape. The details of this obtainment raised a number of questions for investigators. Surkov was awarded citizenship on the grounds of real-estate ownership: a small apartment, 28 square meters, in a partially abandoned building in the town of Haladrion. What a contrast with his luxurious estate in Russia! However, Surkov is not mentioned in the town registry of real estate ownership. It seems that Surkov obtained the right for unlimited travel within the European Union by deceit. Oddly enough, his Greek passport expired in 2016 and the grounds, on which he currently resides and travels within the EU, are unknown to the public. 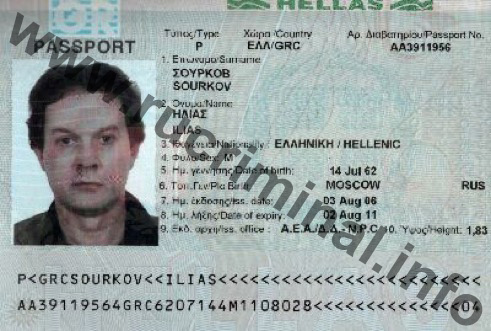 Surkov and Sennova lived in grand style and spent their stolen money tastefully. Surkov bought a villa in the French town Mougins not far from Cannes. In addition to that, the couple settled at chateau Diodato in the French Riviera close to Monaco. Surkov and Sennova stayed there for a long time – the address has even been listed in the phone book. There is no direct evidence of their ownership of the chateau in French documents, though the estate could have been registered via on off-shore arrangement. In France there is no company that goes by their names.

But what if they wished for a change of scenery, perhaps from the hot shores of French Riviera to the chill comfort of the Alps? Everything is possible! Sennova owns an apartment in a Swiss town Zollikon near Zürich. However, the life of high society in London appears more attractive than one in the Swiss countryside. Surkov’s extraordinary talents of a financial schemer helped him afford two apartments in the British capital: one costed the couple £3.45 million and the other £2.8 million. This is the city where the couple chose to settle down.

But something went wrong. Apparently the happy couple ran out of stolen money. Surkov has put the house in Mougins up for sale for $1.2 million and in August 2016 villa Diodato became available for rent to any tourist willing to pay a thousand euro per day for a room.

In London, Surkov and Sennova embody the law-abiding bourgeois. There isn’t a single entry of their names in the English and Welsh court registries. So what could explain Ilya Surkov’s reckless behavior in business and emigrant circles of London? New criminal activities that will surely result  in him hiding from the police. Ilya Surkov (second on the left), charged with serious crimes in Russia, together with his “ex”-wife Lilia Scheffler-Sennova (on the left) celebrates the New Year’s eve 2019 in London.