Sergey Melikov Acting Head of the Republic of Dagestan 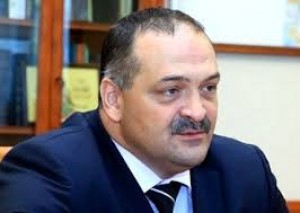 According to Wikipedia, he was born on September 9, 1965 in Orekhovo-Zuevo, Moscow Region, in a Lezgin and Russian family.

Father - Alim Nur-Magomedovich Melikov, was born in Makhachkala on 10/08/1932. Colonel Melikov A.N. served as commander of a brigade of the USSR internal troops. From 1970 to 1973 - chief of staff, then until 1983 - commander of military unit No. 6520, stationed in Ufa (Bashkir SSR). He passed away in 2012.
Mother - Tatiana Nikolaevna Melikova, 03/14/1934, teacher.
Has an older brother, Mikhail Alimovich Melikov, born in 1958. The elder brother is a major general in reserve, he commanded the Novocherkassk special purpose division. M.A. Melikov - head of the public organization "Veteransky Reserve" (registered in Balashikha, Moscow Region).

Saratov Higher Military Command Red Banner School of Internal Troops named after F.E. Dzerzhinsky (1986).
Combined Arms Academy. M.V. Frunze, Faculty of Border and Internal Troops (1994).
Military Academy of the General Staff of the Armed Forces of the Russian Federation (2001).
Colonel General. Religion - Orthodox. The first leader of Dagestan, who by religion is not a Muslim, but an Orthodox.
Information about Melikov's activities - news and photos - is actively published on Instagram.
In February, the republican State Television and Radio Broadcasting Company showed the film “100 days of the acting head of the SD S. Melikov”.

• Military service and service in the National Guard

An attempt by Melikov, who at that time was the first deputy director of the Russian Guard, Vladimir Zolotov, to get one of the streets of Ufa named after his father, caused a scandal in the city. The problem is that his name in Ufa immediately reminds of the tragedy when conscripts from the unit of Melikov Sr., located on Karl Marx Street, hijacked a plane with passengers. As a result, the captured TU was stormed by the Alpha group, and before that the terrorists killed two police officers, shot a passenger on the plane, mortally wounded the second, and also wounded a woman. The captured terrorists then confessed to the investigation that they had gone to escape and seized, unable to withstand the abuse from the officers of the unit commanded by Alim Melikov.
There are also claims to Melikov that the apartment in the prestigious Moscow residential complex Novy Arbat at a price of more than 140 million rubles for his wife is worth several times more than the total family income for several years.
In addition, his older brother Mikhail Melikov is on the board of directors of the Respiro corporation, which owns the Gorky Kimry Shoe Factory (manufacturer of Lepestok respirators), a supplier under government contracts.
During his work in the North Caucasian Federal District, a number of questions have accumulated to Sergiy Melikov. The essence of the claims boils down to the fact that under Melikov, the production of burned vodka and the theft of oil and oil products flourished, and at the same time there was a sharp drop in indicators in the socio-economic sphere. The North Caucasus Federal District fell to the end of the rating in terms of the rate of construction of kindergartens and social infrastructure. And theft from oil pipelines has become such that in 2015 alone, more than 100 tie-ins were found. IN