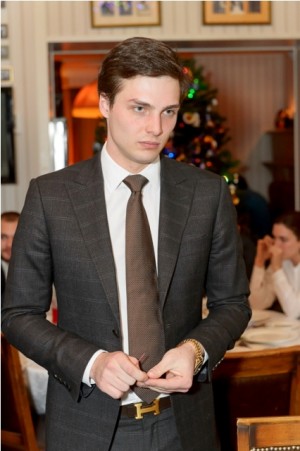 Prior to joining Exillon, Dmitry Margelov worked as an advisor to the Chairman of the Board of Directors of ZAO Rus-Oil, a fast-growing oil and gas company based in Moscow.

Prior to working in the oil and gas industry, Dmitry Margelov held a number of senior positions at Gazprombank, his responsibilities included raising funds and developing business in relation to foreign mining projects (gold mining). In addition, D. Margelov has extensive experience in advising in the field of taxation. As an independent consultant, he made a number of major mergers and acquisitions (M & A).

Dmitry Margelov graduated from the Moscow State Institute of International Relations, holds a master's degree with honors in jurisprudence and finance.

Registering authority: 7718 Inspectorate of the Federal Tax Service of Russia No. 18 for the city of Moscow

Reason: TERMINATION OF ACTIVITY OF THE LEGAL ENTITY IN CONNECTION WITH THE EXEMPTION FROM THE AGREEMENT ON THE BASIS OF P.2 of ST.21.1 of the FEDERAL LAW No. 129-FZ of 08.08.2001

The 17-year-old son of Mikhail Margelov, chairman of the Federation Council Committee on International Affairs, was attacked by robbers last weekend.

As it became known to "MK", ​​in an unpleasant situation, freshman MGIMO Dmitry Margelov pleased September 13 in the afternoon. Two men of Caucasian appearance approached him in the street of Marshal Biryuzov. In the hands of one of the strangers was a knife. Scoundrels demanded from Dmitry a mobile phone. Realizing that arguing with aggressive youngsters is useless, the student gave them a "pipe", after which both criminals fled. By the way, the cost of the phone was about 20 thousand rubles. Dmitry immediately told him about what had happened to his father, who in turn reported about the robbery to the police.

By the way, the victim of representatives of the criminal world, Margelov, Jr. is no longer the first time. About two years ago he was kidnapped and beaten for several hours.

Dmitry Margelov was appointed General Director of the oil company Exillon Energy. The Board of Directors has already approved his candidacy, the appointment came into force on March 24. Simultaneously, Margelov joined the board of directors of Exillon Energy.

Dmitry Margelov, the son of the hero of our story, successfully graduated from MGIMO, worked as an advisor to the Chairman of the Board of Directors of CJSC Rus-Oil, before that - in Gazprom, where he oversaw the attraction of financing for gold mining projects. But on March 24, 2016, the 25-year-old manager, wise and experienced, was appointed to the position of CEO of the oil company Exillon Energy plc. With a turnover of over 120 million dollars. Dmitry Margelov was recommended to the Board of Directors of Exillon by Seneal International Agency Ltd, which, since 2013, holds 29.99% of the share capital of Exillon Energy. So, the prepayment is received. And neatly so conducted on the "union" Belarusian line. And it is clear that this is not a bribe and not an attempt to lobby interests through the now insignificant Vice President of Transneft. The possibility of a recipient's growth against the backdrop of rumors of future age rotation in the Russian corridors of power is estimated more likely.

The state and large oil companies in recent years have not allowed the development of casual owners in the oil market, but the situation with Khotin can be explained by strong lobbying opportunities. Oil workers told Forbes that the head of the Ministry of Internal Affairs and the party "United Russia" Boris Gryzlov helped the oil business of Khotin. In addition, the son of vice president of "Trasneft" and ex-senator Mikhail Margelov Dmitry is headed by Exillon Energy. The representative of Exillon Energy did not respond to the request of Forbes.

Soon after the arrival of Mikhail Margelov in Transneft, his native son Dmitry Mikhailovich Margelov, who was then only 24 years old, was appointed adviser to the chairman of the board of directors of JSC Rus-Oil, owned by Khotin. And in 2016, the young man went on promotion and took the chair of the general director of Exillon Energy. The same Khotyn company, which includes "Kayum-neft", receiving from the filing of Margelov, the senior, unprecedented preferences from Transneft. Such insolent behavior and to think up difficult. And this is on the eve of the election of the Russian president and the outlined course to eradicate all signs of corruption. It is not surprising that the whole situation is now interested in the secret services.

In 2008, Margelov was a member of the Forum, and Aleksandrov had observer status. Another observer "from Margelov" was the president of ZAO "Integrated Investments" Alexey Khotin. This Belarusian entrepreneur is a close associate of the Margelov family. Son of the vice-president of Transneft Dmitry, who is only 25 years old, managed to visit the councilor of the chairman of the board of directors of the company Rus-Oil (controlled by Khotin). And in 2016 he went on to increase - he became the CEO of another oil structure of Khotin - Exillon Energy. By the way, the business relations between the companies Rus-Oil and Exillon Energy and Transneft, which until that time looked very tense, after the arrival of M. Margelov in the state company, were adjusted. In addition, on the sidelines, the Hotins brothers openly refer to Margelov as their "agent of influence" in Transneft. It's hard to argue with this, it's not by chance that the oil companies controlled by Khotin-Margelov (JSC Kayum oil, CJSC NK Dulisma, LLC Polar Lights Company, ZAO Nem Oil - the list is far from complete) were received by Transneft "Super exclusive conditions for the pumping of their products, and the responsible employees of Transneft through their fingers look at the constant failure to meet the technical conditions of the connection, their unjustified extension, the excess or understatement of the declared volumes handed over to the" pipe "of oil, And other violations of internal procedures of the state company.