Alexander Klyachin Chairman of the Board of Directors of Azimut Hotels 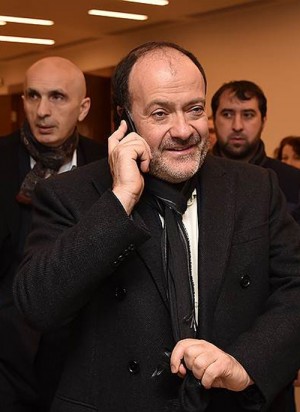 Read this text in Russian
Имя: Alexander
Фамилия : Klyachin
Отчество : Ilyich
Должность : Chairman of the Board of Directors of Azimut Hotels

The beginning Like many developers and landlords, Klyachin bought the securities of companies in Moscow and the land from the peasants from decaying collective farms and state farms. He still remains a major landowner.

Alexander Klyachin's personal life is also hidden from the General public, as well as many pages of his biography. The billionaire is married, and, according to very vague data, his wife is Anna Goldin, Vice-President of AFK Sistema. As far as we know, the couple raised two children. The eldest son Anthony was born in 1996, and 5 years later the family was joined by another boy – Andy.

On the website www.topinvestors.ru (in fact, is an electronic guidebook, which involves the publication of information about persons in the industry of mergers and acquisitions), Alexander Klyachin, ranked third in the top five leaders of the domestic of raiding. Very significant leadership. A little more and only one of the first signs of the emergence of ZAO Nerl on commercial and economic horizon will be considered local entrepreneurs and business executives as a signal of danger, which required immediately to minimize contacts with partners and to disband the team, get rid of the assets.

On the "battle account" of the company "Nerl" dozens of hostile takeovers. And the appetites of the company are simply amazing. That Alexander Klyachin and his business partners there is the idea establish the State public scientific technical library of Russia (SPSL) at the Kuznetsk bridge, trading and office center, one of the largest office centers in Moscow Nerl intends to build on the site of a textile factory "Red rose" (by the opinion of the management of the factory in such cases, as usual, have little interest in), Nerl is trying to absorb OJSC "GIPRONIIAVIAPROM" – the head design organization aviation industry (fortunately, unsuccessfully). Interested in "Nerl" and farmland in Moscow and Tver regions, and now, it seems, no state farm in these regions to sleep peacefully, as they say, can not. As a result – only in the suburbs "Nerl" owns more than 13 thousand hectares.

As previously wrote the newspaper "the Age", Vasyl Boyko was in conflict with Alexander Klyachin for land for Ruza. According to the newspaper, in 2003. the staff of the Nerl, with the support of the notorious chop "Rodon" arrived in farm "named after L. I. Dovatora" and forced local residents to sell land shares under the threat of violence. Some farmers were taken away at night for 30 kilometers from the village and faced a choice: either they sell their share, or they are thrown in the middle of the night forest. Direct confrontation Nerl and WWF happened at the farm, "Ann", which is also frequented by subordinates of Alexander Klyachin. According to the newspaper, for a long time "Nerl" worked in close contact with the raider investment company "Russia", the leadership of which was later in prison. From "Russia""Nerl" and adopted a tough style of raider attacks.

Alexey Kuzmichev from "the alpha-EKO", from Suleiman Kerimov "Nafta-Moscow" Vasily Boiko from WWF, Alexey Tulupov from "Rosbilding", Alexander Klyachin from Nerl — call them "your heroes" of today's anonymous and small raiders, hiding timidly behind a mate label soldiers on the website zahvat.ru. But do "heroes" for a long time already from raiding disown. "Alpha-eco" changed its name to "A1" and became known as the direct investment Fund. Since the mid-2000s, Alexey Kuzmichev has been involved in projects to start trading futures for Russian oil on the new York commodity exchange (NYMEX) and to create an oil exchange in Russia, as well as headed the venture Fund "Russian technologies". Nafta-Moscow became one of the largest Russian developers, acquiring several construction companies, including the largest stake in the PIK group. The founder of the company Nerl Alexander Klyachin sold the company and became hoteliera, buying Austrian Hotel Company that manages 21 hotel in Europe.

You can pay tribute to the business acumen of Alexander Klyachin, but it is clearly impossible to call him a hot patriot of his native homeland. For he decided to sell his "Nerl" along with "pressed" land pool of investors from the Middle East.

However, interestingly, these buyers to the land assets of "Nerl" (which were estimated at about 600 million dollars – according to experts, "Nerl" was able to get into the property of almost 15 thousand hectares of land), treated with great caution.

And now, replacing, figuratively speaking, tracksuit Adidas (favorite clothes not only petty criminals, but also ordinary raiders) tuxedo, the newly minted hotelier rushed into the gambling business at the international level. Will he be able to compensate for the mistakes in the work of the rigidity of action – we'll see. Although he has a partner, in addition to the Russian gambling specialist, also the American company Warner Gaming. These are Las Vegas guys. And there to joke, as you know, do not like.

Klyachin and Gordeev get a minority stake at first, then adjusted it to 50%, and in late 2013 was to redeem the remaining shares Vasina and Rudnikova. But the relationship is not spared from betrayal. Vasily Vasin in the summer of 2012 refused to go out of business and moved from his 17% stake to the side of the "investors". Vyacheslav Rudnikov claims that Vasily Vasin and Alexander Klyachin collusion took place at the stage of negotiations on entering into business, however, he understood it when it was too late. And after a few months, they stopped hiding it. According to Rudnikov, he was denied the results of financial and economic activities, closed access to the office and began to withdraw money from the company.

According to the businessman, since the end of 2012, new investors have openly understated the company's profits, and this has already affected the cost of The Rudnikov package, left alone.

According to the businessman, in may 2013 at the meeting of shareholders Alexander Klyachin openly said: "Vyacheslav, you are in the minority, I would be in your place out of the company ahead of schedule, without waiting for the end of 2013." Realizing that it is pointless to resist with such a ratio of forces, Rudnikov estimated his 33% stake at $ 38 million, at the lower level. He was offered 10 million less. He refused. After that, the hot phase of the attack on Rudnikov and his assets begins.

See the original article on the website "top secret" : https://www.sovsekretno.ru/articles/popressovali-i-obobrali/

Already in 2012, the confrontation between the world's largest player IKEA and the owners of the former state farm "Path to communism", transformed into a "Collective agricultural enterprise" (KSHP). KSHP, which, according to media reports, controlled by Alexander Klyachin, since the land battles for the Moscow region, suddenly began to claim a plot of land in more than 16 hectares a few kilometers from the Moscow ring road on the Leningrad highway, under the two buildings of the office complex "Khimki Business Park" owned by IKEA. In recent years, the Swedish business giant has managed to fend off KSHP. Although the courts have arrested the disputed property, then shot the interim measure on the suit of the KSHP.

Why successful by the time the hotelier and owner of the famous "Metropol" Alexander Klacina had to be involved in litigation with unpredictable results (1993-IKEA rented this land from the city administration of Khimki, and then bought it in the property), already has told sources close to the process of the KSHP against IKEA. According to them, representatives of the plaintiffs have repeatedly come into contact with a business proposal to pay a large compensation for the quiet existence of IKEA in Russia. The requested amount, according to some reports, was estimated at tens of millions of dollars.

In 1997 he became General Director of the investment company.

The company was called "Nerl", in honor of the same name tributary of the Volga river, and of course no net investment is not engaged.

Nerl Klyachin deception and threats of buying up suburban land from distressed farmers, and later, in the early 2000s, took away the property from the not agile of Directors of various research institutes, construction organizations and even defense companies.

"The farm raider" — so dubbed Klyachin and "Nerl" journalists working in those years of aggressive mergers and acquisitions.

The newspaper "Version" recalled a demonstration battle for the suburban farm land "Ann", which was played at the end of the 90-ies between klaczynski the "Nerl" and the company "your financial Trustee" another landowner Vasily Boyko.

In 2008, a criminal case was initiated against the heads of the Nerl company. It is possible that it is because of this Klacina had to leave Russia and temporarily retire from the business. At the same time, all the company's shares and other assets were bought out by Russian funds in the interests of middle Eastern investors. However, experts are of the opinion that Klyachin himself was interested in this, who tried to avoid punishment and move away from business. In support of this version says the fact that a few years later a number of assets of the company were again in his hands.

I am absolutely convinced that Alexander Klyachin's group spent huge money on bribing investigators, prosecutors and courts. He probably uses his many connections in these structures, to achieve the truth I can not. Klyachin Alexander is known as a very experienced raider, his grabs a lot of information passed in the media, obviously, he has an experienced trained a team of “fixers” and lawyers, which was used in the theft of assets "Belafonte" and "KS-trust". I am sure that he at least has presented its capabilities and connections to address the issue of seizure of assets, and directly carried out major criminal acts Chests, Vasin and Bamgbala.

Saburo-invest LLC in the Moscow arbitration court requires about 6.1 billion rubles from the Moscow AZIMUT hotels company, owned by businessman and main sponsor of the Bolshoi theater Alexander Klyachin. According to the data, this is not the only problem of a millionaire. Lately almost all those around him were behind bars. For example, there is Valentine Gontarev - the "right hand" of the ex-head of the Department To the FSB Victor Voronin. Under house arrest is a longtime friend and business partner klyachina Alexei Khotin.

According to sources Rucriminal.info angry Klyachin went to his "roof" in the face Gontareva and other security forces. Method of operation Gontareva is to organize provocations against the "enemy" objects, and then create on the basis of these events, the so-called online help. Say, companies contribute to the thugs, harm the Russian population, pulling money out of the country, etc. TOAZ was to blame in promoting the militants. For this Gontarev now sits. He recommended that in 2015 Klecina, something to create in relation to IKEA to various agencies it was possible to move the topic with the closing of several stores of the Swedish chain and criminal cases.